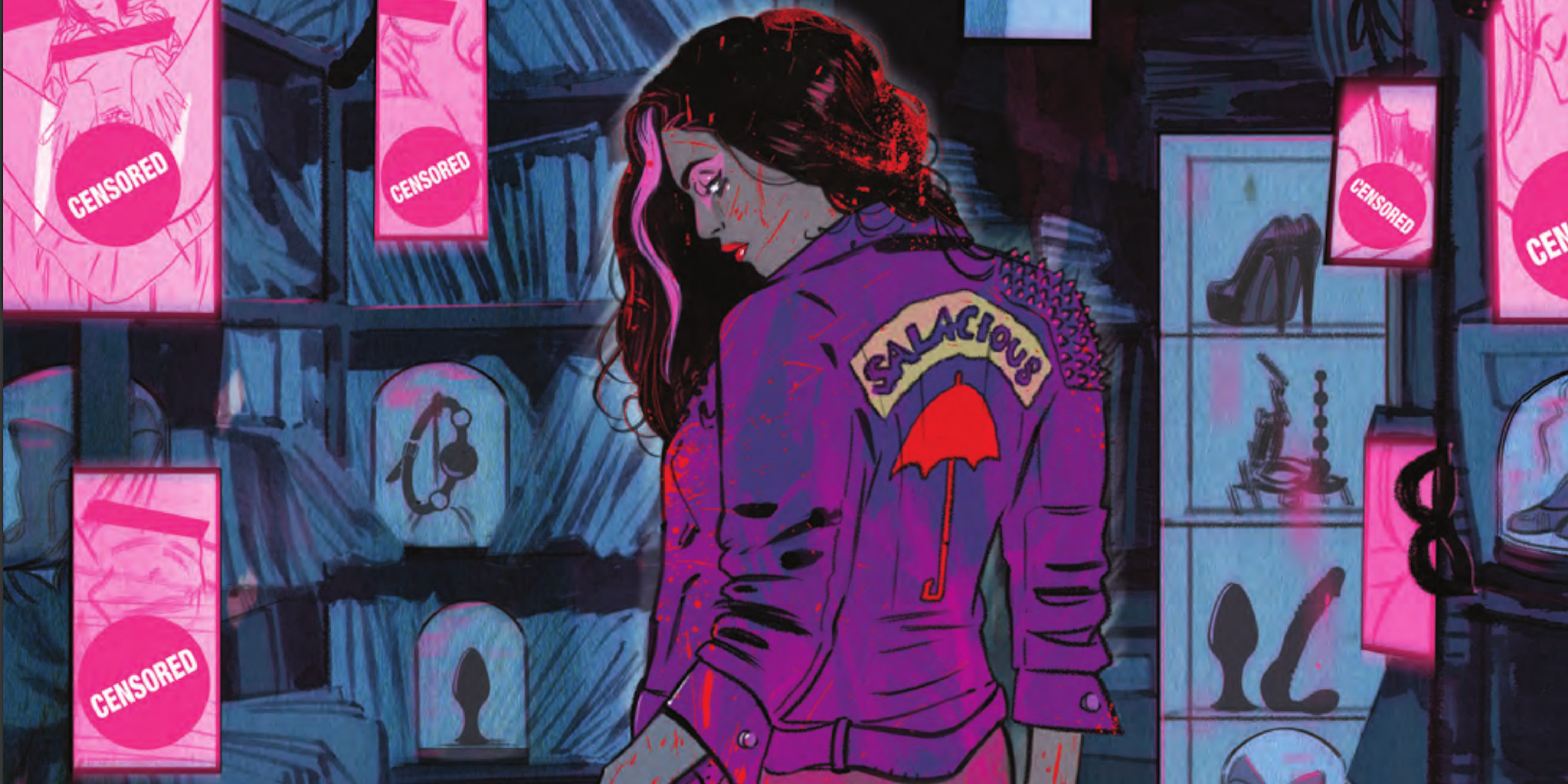 Before the Department of Homeland Security deployed federal troops in Portland, Oregon, it was raiding an office in Manhattan. Five years ago, Rentboy.com was hit with prostitution charges under allegations that it operated as an “internet brothel [that] made millions of dollars from promotion of illegal prostitution,” as one U.S. Attorney proclaimed to CBS.

The Rentboy raid was central to what CBS called a “digital Stonewall,” as sex workers and queers met in Manhattan to protest the feds’ homophobic and whorephobic crackdown. At the time, Tina Horn was working for Rentboy, where she avoided arrest but lost her job. When the feds showed up, they declared Rentboy was no more, and that was that, Horn told Jezebel’s Chingy Nea last year.

“The feds did not make the world a safer place that day, sexually or otherwise,” Horn told the Daily Dot over email. “Every day, sex workers are stalked, harassed, assaulted, and imprisoned by the police online and in person for trying to make a living, and many trans people are profiled for being sex workers even if they’re not. Policing does not make sex safer; it makes people with a vested interest in status and power feel safer.”

The feds don’t make the world a better place in Horn’s debut comic series SFSX (or “Safe Sex”). SFSX, which just finished its first volume run with Image Comics, follows a dystopian U.S. controlled by a fascist Christian authoritarian party that’s made peace with mainstream feminism at queers’ and whores’ expense. Life is decidedly authoritarian and minutes away from totalitarianism, although there are twists that could only show up in a 21st-century sci-fi story written by a queer sex worker. Case in point, gay men can still rise high in the Party as long as they’re more Pete Buttigieg than Larry Kramer. These gay men—emphasis on “gay,” not “queer”—have no qualms with torturing sluts and trans people who go against their wishes.

“One of SFSX’s villains is an old white conservagay licking boot and throwing his community under the bus deliberately to maintain his position of power,” SFSX illustrator Jen Hickman told the Daily Dot. “When Pete Buttigieg was in the spotlight (which feels so long ago!) I was genuinely surprised at how much of a mirror SFSX had held up to that kind of person.”

It’s not a crapsack world in SFSX—if you’re white and straight. The lights still work, running water is still there, tech is more advanced than ever, and it’s still easy to be a pencil pusher, a software engineer, or a news anchor. The trade-off is freedom.

It’s easy to draw parallels between Rentboy and SFSX’s opening scene, where police raid the queer sex workers’ hangout the “Dirty Mind,” complete with cops arresting leatherdykes and claiming that they’re saving them from themselves. As the story unravels, those who suffer the most under fascism take center stage: sex workers, queers, perverts, trans kids, people of color, migrants, political dissidents, and so-called “criminals” that fascists target, marginalize, brainwash, and kill to achieve their own goals. SFSX is a crime thriller rooting for the criminals, for sure, but it’s less a depiction of a distant dystopian future and more a satire of the present with critiques of “incarceration, of cruel and unusual punishment, surveillance, illicit objects, who is profiled as criminal for being who they are,” and the comic industry’s racist fixation on the villainous “ethnic other,” Horn said. It’s no coincidence that SFSX’s villains look like prominent conservative figures, nor is it that its protagonists are sex workers of color.

“Sex work is a testing ground for what the state can get away with. Fascists know that if you can control sexual ideas, you can control people en masse. Sex workers defy false moral order, and fascists can’t abide that,” Horn said. “Anti-sex work laws stigmatize emotional labor so the state can moralize and control bodily autonomy.”

On the one hand, SFSX very much represents the way the U.S. has historically oppressed queer sex workers, whether that’s through gay sex club raids or resume gaps. But SFSX also has a lot to say about the intricate issues queer sex workers deal with in our own communities, including horizontal violence, class privilege, communal responsibility, and how fascism can traumatize white queers into supporting (or at least enabling) the fascist state. This is partly because SFSX isn’t a story about sex workers for civilians but a comic series by and for queer sex workers.

“I’d rather put art out there to make people feel seen and empowered than proselytize people to see sex workers as human,” Alejandra Gutiérrez, who illustrated SFSX’s third issue, told the Daily Dot. “Like, we know how dire it is, me as a sex worker, as an immigrant, as a trans woman of color, as a queer woman, I’m not trying at this point to convince people that we deserve to live, I’m trying to bring some life into people like me and put us out there and lift us up.”

SFSX doesn’t hold any punches about just how far a fascist government will go to emotionally, physically, and mentally destroy its targets. One core character arc explores how a kinky, self-assured pervert goes from a radical liberator to an authoritarian because of her own internalized shame. It’s a problem that neither “love” nor “family” can fix. In SFSX, people get shot and killed when they can’t accept that reality.

“Are you sure 2020 America isn’t a Christian totalitarian state making perfunctory concessions to white feminism and respectable homo-normativity?” Horn said. “Not only could everything in SFSX be true very soon, most of it is already true. I think there’s a lot of people out there who assume a form of oppression isn’t real if they haven’t heard of it before. Even when oppressed people outline the ways it’s real, people still don’t want to believe.”

Shame and power are undercurrents throughout SFSX in part because shame is weaponized by the state against its citizens to dictate whether their sexual desires are acceptable. But the series pulls a reverse X-Men: Instead of using privileged people as a metaphor for the most marginalized, it throws the most privileged bodies into brutal torture scenes in order to save marginalized readers from the gut-wrenching experience of seeing their own bodies tormented mid-issue. That’s not just a good thing for readers’ trauma triggers—state-sanctioned genital torture and forced masturbation appear later in the series—but it allows Horn, Hickman, and Gutiérrez to off-load that baggage on white men so SFSX’s sexual politics can be explored with its queer bodies.

That doesn’t just include violence. One beautiful sex scene in SFSX involves a queer trans sex worker getting fingered by her cis lover. The end result is a testament to the beauty of trans/cis lesbian desire—and SFSX’s commitment to its characters’ own sexual politics. What’s doubly powerful is how rare cis-trans lesbian sex is in media, and yet how nonchalant the series is about the sex scene.

Granted, SFSX isn’t about the power of love over fascism. It turns out you can’t fuck your way out of authoritarianism. If you don’t want SFSX to become a reality, then you have to listen to Black Lives Matter, migrant rights, trans people, and “sex workers, queers, sluts, anyone whose identities undermine cis-heteronormativity,” Horn said. Sexual liberation is just one part of the story, and just as you can’t have revolution without getting finger-blasted, you can’t have it without trans sex workers of color.

“I think there’s a lot of powerful people who believe that controlling sexuality will make everyone safer. But what good is safety if it’s at the expense of freedom?” Horn said. “That’s the message of SFSX: a future that prizes sex without risk means a future of sex without pleasure, self-expression, intimate connection, or love.”