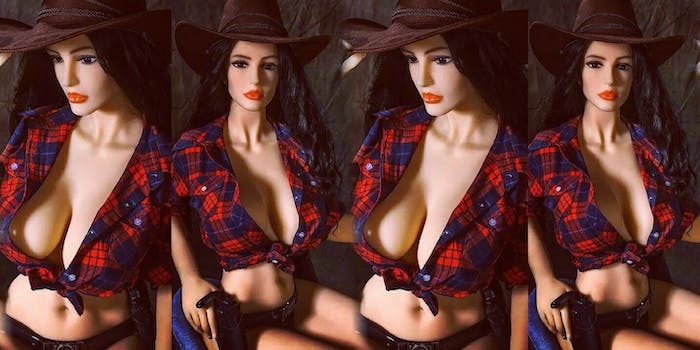 A sex robot shop is coming to Houston—or, at least, it’s trying to

Sex doll company KinkySdollS is looking to open up the first-ever American sex robot brothel in Houston—but the city’s leaders, as well as a Christian nonprofit group, aren’t into it.

According to the Daily Beast, the Toronto-based company announced its intention to open its first “Adult Love Dolls Brothel” in Houston—which would be the first “brothel” of its kind in the country— last month. The establishment will sell lifelike sex robots and will allow customers to rent and test them before buying them. However, a myriad of issues with the city may put a stop to the businesses’ construction altogether.

In a press conference hosted last week, Mayor Sylvester Turner seemed less than thrilled at the prospect of his city hosting the country’s first sex robot brothel, stating it wasn’t the “sort of business” he was looking for in Houston.

“I’m not trying to be the moral police or anything like that, but I am charged with the health and safety of the people within our city,” Turner said.

On that same day, the site of KinkySdollS’ business was red-tagged by inspectors from the Houston Public Works Department, which found, after a routine stop, that the demolition occurred “without a permit,” meaning construction must be halted. Then, according to ABC13, the property owner came out saying that he never signed a lease with KinkySdollS, and that the brothel had been “misrepresented as an art gallery,” leaving the owner misled and wanting no part in “sexually oriented business.”

And on Wednesday, the Houston city council will be addressing a proposal to expand the city’s existing ordinance on “sexual arcades.” That expansion may include the sale of “anthropomorphic devices and objects utilized for entertainment,” but stop short of allowing customers to use the “devices and objects” in the store itself. A business found in violation of the ordinance could have its permit revoked.

Online, a petition of more than 13,000 signers is also battling the sex robot brothel on the basis of these sex robots contributing to the exploitation of women for sex and therefore sex trafficking. The Houston Christian nonprofit leading the charge, Elijah Rising, argues that robot brothels are a form of sex work, and will “ultimately harm men, their understanding of healthy sexuality, and increase the demand for the prostitution and sexual exploitation of women and children.”

Jezebel does a pretty good job of questioning the argument, stating that while we do need to have real conversations about consent, gender, and power, this group is just conflating sex work with sex trafficking, and is using sex to generate fear.

Earlier this year, feminist groups called for a similar business in Paris, Xdolls, to be shut down, claiming the sex doll rental company helped men “normalize the degradation of women” and fuel their “rape fantasies.” The French Communist Party argued that the sex dolls “appear to be child-like because of their small size,” and profited off the simulation of rape of women.

According to the Daily Beast, Italy’s first sex doll brothel was closed just after a week of business after being raided by police. Other brothels exist in England, Germany, Holland, Austria, and Spain.

This concern that sex dolls fuel rape fantasies isn’t exactly unfounded—according to a 2017 report released by the Foundation for Responsible Robotics, researchers are split on the notion that sex robots could provide therapeutic prevention for rapists. The other half think that it might just reinforce this kind of behavior. Ethicists also disagreed that allowing someone to act out real-life sexual desires of rape and pedophilia on sex robots would repress them—particularly when sex robot technology can be programmed to simulate rape (though some robots are being programmed to turn down sexual advances, too).

That being said, the idea that sex robots aren’t necessarily a constructive therapy for people who already exhibit sexually predatory behavior isn’t the same as the idea that the use of sex robots leads to the direct or indirect sexual exploitation of women.

Online, the company has already responded to the controversy, dressing up one of its own robots in a wannabe 10-gallon hat, plaid top, and holster, complete with some sort of pistol.

“We love Texas, and Texans love us,” the caption reads, punctuated with a winking emoji.

KinkySdollS did not respond to the Daily Dot’s request for comment.