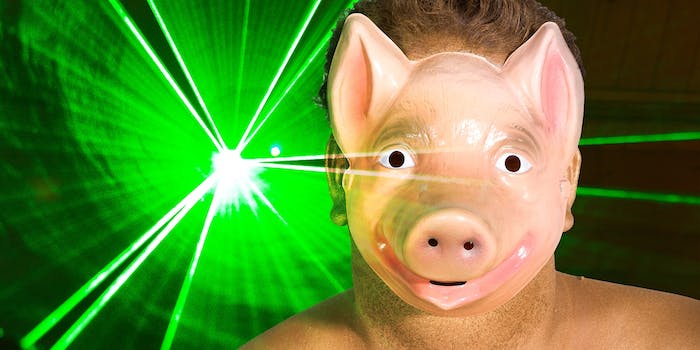 Swedish pig-masked teens scare Pokémon players with lasers, then have sex against a waterwheel

The internet is all about this wild tale that has everything—even a rubbernecking traffic jam.

Two Swedish teens were playing Pokémon Go in their small village of 2,000 people, when they stumbled onto a couple in pig masks. The couple, also wearing T-shirts that read “King” and “Queen,” respectively, screamed at the teens and pointed a green laser at their faces.

The teens fled and so did the masked couple, who were next seen having sex against a giant waterwheel. The sight backed up traffic as people got out of their cars to watch.

A local Swedish news site notes, “The police didn’t care so much about the traffic jam, she said, but officer Daniel Hagthorpe was concerned about the alleged laser attack and public sex.”

The teens are reportedly OK, but the internet isn’t. The story is being hailed as one of the best stories and headlines of 2016.

This Swedish vacation was not as eventful as it could have been. https://t.co/DwNsGbyz0e