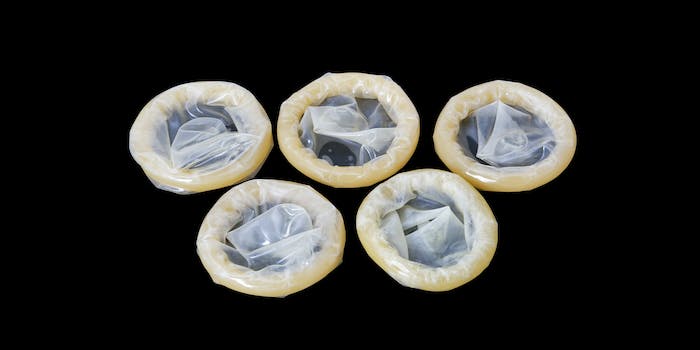 Confine thousands of hyped, ultra-fit young people—and, of course, they're going to get it on.

The sexiest day of 2018 is not Valentine’s Day. It’s actually every day in February, when Olympians flood the Olympic Village, aka a notorious sex den, for the Winter Games in Pyeongchang, South Korea. Yes, it is time once again for the world to marvel at heart-stopping skeleton bobsled runs and a truly baffling number of pompadours—and for the world’s best athletes to marvel at one another’s naked bodies.

If the Olympics teach us nothing else, it’s that precision is key, so to be very precise, there are two Olympic Villages at this year’s games: Gangneung Village, which houses ice sports, and Pyeongchang Village (which houses everyone else, I guess). There is also a media village, where reporters must throng their way through the towering penis statues stationed on the premises. When the athletic villages opened their doors on Feb. 1, International Olympic Committee (IOC) President Thomas Bach addressed the crowd:

What else does the IOC expect to happen in the Olympic Village? A fuck ton of sex.

Just how much sex is that?

The ESPN report suggests that when you first arrive, the village dining hall is the best place to scope out hotties, but things progress quickly because everyone’s basically just wandering around in their underwear when they’re not competing. (Probably, this means skimpy training spandex, and probably, this is more typical of the Summer Olympics than it is of the Winter.) According to Beaux Greer, an American javelin thrower who apparently had a “revolving door” situation engineered at the 2000 games in Sydney, all the sex is a boon to athletes existing in a pressure cooker: “If you find somebody you like and who likes you, your world’s complete for a second, and you compete well.”

Apparently, this is all part of a work hard, play hard mentality. “Athletes are extremists,” goalkeeper for the USA Women’s Soccer Team Hope Solo told ESPN. “When they’re training, it’s laser focus. When they go out for a drink, it’s 20 drinks. With a once-in-a-lifetime experience, you want to build memories, whether it’s sexual, partying or on the field. I’ve seen people having sex right out in the open. On the grass, between buildings, people are getting down and dirty.”

There is no shortage of condoms

In Pyeongchang, 100,000 of the condoms come courtesy of South Korean company Barunsengkak, while the Korean Association for AIDS Prevention kicked in another 10,000, according to Time. The condom tab comes to over $93,000, which seems pretty reasonable to me: With the games charting some of the coldest temperatures on record, people are going to need to keep mashing their naked bodies together for warmth if they want to make it out of the Olympic Village alive.

And anyway, Olympic Village sex is very much par for the course and so are the condoms. As Time reported, in a top-notch timeline cataloging Olympic sex through the ages, condoms have been freely available, on demand, to Olympians since 1992 (with the exception of 2002’s Utah Winter Games, when conservative state politics ruined everyone’s good time). Four years prior, the IOC banned outdoor sex thanks to the carpet of condoms covering the roof of the men’s Olympic Village at the Seoul games in 1988. (According to a separate Time article, this was actually the first year of free Olympic condoms, a result of the HIV crisis.)

The current condom supply isn’t necessarily a direct result of Seoul’s litter problem, but year after year, the “Olympic village is described as adult Disney World where Olympians, amped up on their own glycogen and smuggled alcohol, exhaust supplies of condoms by the tens of  thousands,” as one 2010 report put it. Or, in recent years, by the hundreds of thousands.

Tinder is breaking new records for the 2018 games

Of course it is, and while Tinder wasn’t the first dating app to get love during the games (Grindr reportedly crashed at the 2012 Summer Olympics in London), it is a perfect tool for this event: With thousands of athletes cooped up together, it helps to know who’s single and looking.

For this year’s Winter Olympics, Tinder granted everyone in the village free access to Tinder Gold, which allows users to see who’s already liked them before swiping right. It also lets members revoke swipes, and—crucially—grants access to Tinder Passport, a service that allows you to connect with users located anywhere in the world. With a bunch of people representing countries from around the globe cloistered together in one place, you can readily see where this tool would be useful.

Really, who among us is surprised by all this sexual activity? “Put together a bunch of very fit 20-year-olds in one space, with nowhere else to go,” as Team USA ice dancer Madison Hubbell hinted to Cosmopolitan, and what the hell else do you think is going to happen?