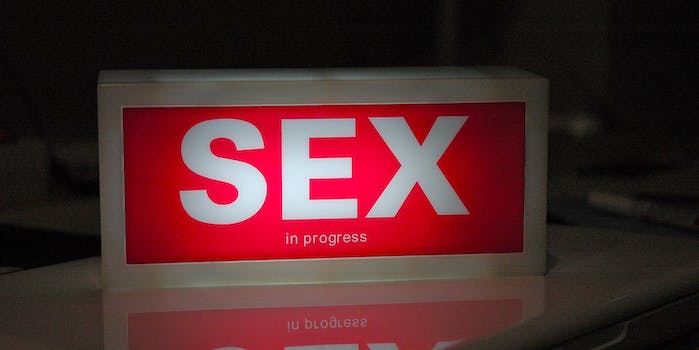 Last week, the American Association of Sexuality Educators, Counselors, and Therapists (AASECT) released a definitive statement on its website. In it, they politely but firmly rebuked the idea that sex addiction should be considered a true mental health disorder in the same way depression or schizophrenia are. More brutally, they denounced the accredited training and education that health professionals receive in order to become a sex addiction counselor as unscientific.

“[AASECT] felt like it had to take a position, from a consumer protection and a professional perspective, that sex addiction therapy is not adequately informed by current and accurate sexuality information,” Douglas Braun-Harvey, a San Diego-based sex educator and counselor and one of the four AASECT members who drafted the initial statement, told Vocativ. “We don’t believe that you can link an addictive process with people whose sexual urges, thoughts and behaviors feel out of control for them. There’s lot of other explanations for it.”

While not a firm policy change, AASECT’s clear stance is important, given that their certification is required for anyone to become a professional sex counselor in most of the U.S. (Florida is the sole exception, according to Braun-Harvey). And it reinforces other moves AASECT has made to distance itself away from the sex addiction model. For instance, though people can still obtain accreditation as a sex addict counselor while pursuing or renewing AASECT membership, that training won’t help earn them the latter. And the organization offers no continuing education credits for courses or workshops that teach sex addiction training.

As Braun-Harvey explains, sex addiction hasn’t always been the ugly duckling of the field. The debate over its legitimacy has certainly raged on for decades, and it’s never been a diagnosis in the DSM—the so-called bible of the mental health world. But the idea that people with damaging, if consensual, sexual thoughts or behaviors could be helped was refreshing in the 1970s and 80s, when it was first popularized. Before then, such people may have been written off as irredeemable perverts.

Ultimately, though, the science behind sex addiction has never been too sturdy. Just last year, Vocativ covered a UCLA study of self-admitted porn addicts that found their brains didn’t react the way they should have if addiction was their problem. Instead of having increased brain activity when exposed to their folly, like a compulsive gambler would when about to roll dice at the craps table, they had decreased activity. Other research has found there’s really no such thing as the typical sex addict, with symptoms ranging widely from one case to the next, further throwing into doubt whether it should count as a separate, diagnosable disorder.

Biology aside, the language of sex addiction creates a narrow-mindedness around sexual health problems, Braun-Harvey says, one that most therapists (if not Anthony Weiner) have long since moved on from. “I think the most important thing to remember is that there are people who are really suffering a lot from their sexual behavior being out of control, but what ends up happening is that the suffering, the fear, and the consequences it brings to their careers and families gets prematurely and very quickly labeled sex addiction,” he says. “That’s a conclusion. And that conclusion comes with a whole range of assumptions about what’s happening.”

Rather than jumping ahead, sex therapists and patients alike should work together to figure out the possible underlying causes behind their behavior or thoughts, he says, while not stigmatizing sex itself as something inherently dangerous. Echoing the AASECT statement’s concluding note, Braun-Harvey hopes that researchers and therapists from all branches of the field can collaborate and create a gold standard of care for people who do feel their sexual proclivities are hurting them and their loved ones.