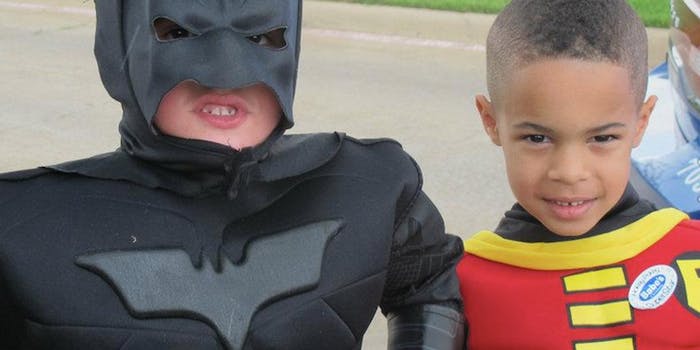 Seven-year-old with leukemia is Batman for a day

For one day at least, Kye fought crime instead of cancer. Watch the heartwarming video of his memorable day.

Kye is a fighter. Every day, the 7-year-old boy from Arlington, Texas battles against leukemia.

On Saturday, however, he took a break from his daily struggle to fight a different sort of battle—arresting Batman’s nemeses, the Joker and the Riddler.

A collaborative between effort nonprofit A Wish With Wings and the Arlington Police and Fire Departments gave Kye the opportunity to be “mini Batman” for a day of crime fighting. With realistic sets, costumed actors, and a small film crew, the organizations were able to make Kye’s wish come true.

The adventure began when Kye and his good guy pals halted the Joker’s bank robbery, before going on to apprehend the Riddler for a foiled “car bomb.” After the bad guys had been sent to jail, Assistant Police Chief James Hawthrone presented Kye with a key to the city. It wasn’t a day the young crusader would soon forget.

“I just want to say, that was fun,” Kye told the Star Telegram.

The Arlington Police posted a full account of the event on its Facebook page, tugging the heartstrings of commenters from all over.