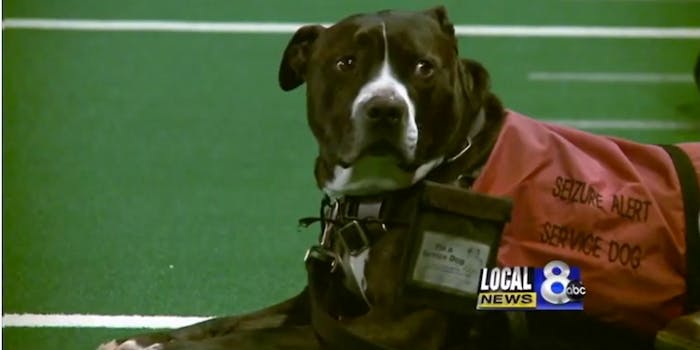 At Idaho State University’s graduation ceremony this year, one four-legged honoree walked across the stage amid the two-legged graduates.

Cletus, a service pit bull, joined 2,000 ISU students onstage to accept a diploma on behalf of Joshua Kelly, an ISU student who died as a result of epilepsy during his last semester as an undergraduate. Kelly’s father, Terrell, walked Cletus across the stage, whispering his son’s name as he accepted his diploma. Cletus acted as a seizure alert dog and stayed by Kelly’s side when he suffered the symptoms of his disorder.

Kelly was posthumously awarded a bachelor of science from the university for his work as a geology major.

Local reporters asked Terrell what he thought of having a pit bull for a service animal, since the breed is often portrayed as aggressive. “He allows our little grandchildren to climb on him, pull his ears, pull his tail—he’s just great,” the proud father said.