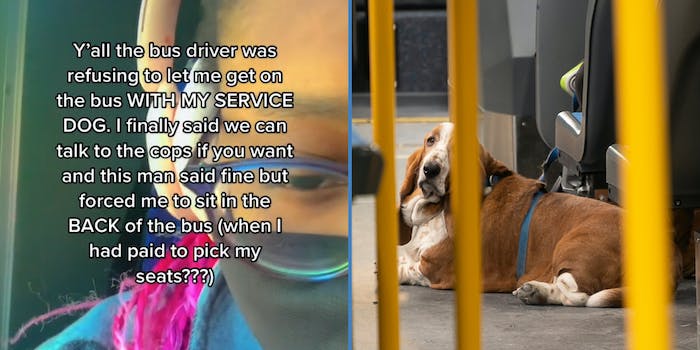 ‘A horrible way to treat someone’: TikToker says bus driver refused to let her on with service dog, forced her to sit at back of bus

The TikToker says she paid to pick her seats—but was forced to sit at the back.

A TikToker has gone viral after claiming that she was refused entry on a bus because of her service dog. When she pleaded with the driver to let her on, she says, he eventually caved and allowed her to board the bus—but forced her to sit in the back.

The video, posted by user CJ (@cj_inroom217), shows CJ wearing headphones on a bus while the text overlay details her claim.

To make matters worse. When he got mad he turned to my YT gf like bruh… no he wasn’t 🥛 but he was def r4cist

“Y’all the bus driver was refusing to let me get on the bus WITH MY SERVICE DOG,” she writes in the text overlaying the video. “I finally said we can talk to the cops if you want and this man said fine but forced me to sit in the BACK of the bus (when I had paid to pick my seats???)”

In comments, CJ explains that she has a service dog for a “stress disorder.” However, she notes that incidents like these are “just causing [her] more stress.”

Commenters sided with CJ, with many suggesting she seek legal recourse against the bus driver or the company.

“Better get his name and complain to the company,” wrote a user.

“You definitely should talk to the company or mention this to a lawyer and keep the bus ticket as proof of your route,” a second viewer agreed.

“I’m so sorry that’s so blatantly illegal and a horrible way to treat someone,” a third added.

The Americans with Disabilities Act protects those with disabilities and enshrines in law their right to bring service animals onto many forms of transit. This includes both public and private buses.

Despite these limited legal protections, CJ explained in comments that this wasn’t the first time that she’s felt attacked due to specifics about who she is.

“It’s kind of sad that in the grand scheme of things this wasn’t even close to the worst thing that’s happened to me [because] of my disabilities/race/mental illness,” she wrote. “I wish I had a platform to advocate for people like me who just like can’t live and function [because people] don’t care [about] us.”