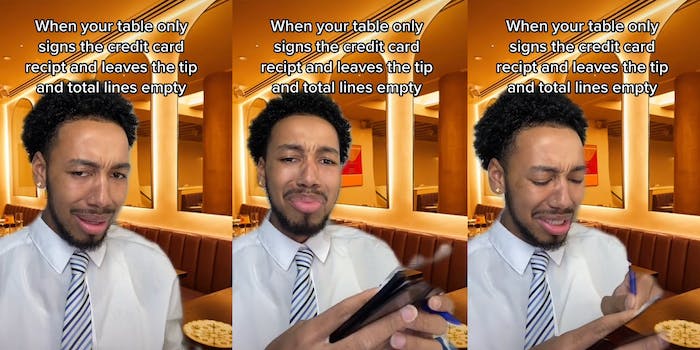 ‘For legal reasons, this is a joke’: Viral TikTok sparks debate about servers filling out tip section on receipt when customers leave it blank

'I always put a dash across it and the total when I leave a cash tip. Can’t trust anyone.'

A TikToker’s satirical video about filling out the tip section when customers leave them blank sparked a debate among commenters.

The TikToker, Christian Maxwell (@christianmaxwelll), who works at a restaurant in New York City, according to his bio, posted a satirical video pretending to write in a tip after his customer didn’t leave one but left the section empty.

In the video, Maxwell records himself pretending to scribble on a notepad, as the text overlay notes: “When your table only signs the credit card receipt and leaves the tip and total lines empty.”

Maxwell’s video was seen over 63,000 times and was generally well-received by viewers. “For legal reasons, this is a joke,” one person joked in the comments section.

Several viewers explained what steps they take to ensure this doesn’t happen to them when they dine out and tip cash.

“I always put a dash across it and the total when I leave a cash tip. Can’t trust anyone,” one said.

“I ALWAYS THROW THE SECOND ONE AWAY FOR THIS EXACT REASON!!!!” another said.

Maxwell clarified that the video was a joke in the comments section. “You do this even if the person leaves a tip? I usually write cash but sometimes I forget,” one viewer said, to which he replied: “don’t actually do this, neither do the people around me. I can’t speak for those who do LMFAOO.”

The Daily Dot reached out to Maxwell via a TikTok comment.