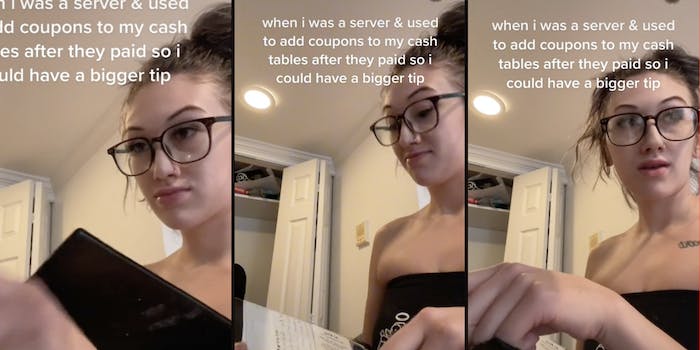 ‘If they actually paid servers then they wouldn’t have to hustle’: Server says she added coupons to cash tables after they paid so she could get bigger tips

'I was making money one way or another.'

In a viral TikTok video, a former server said she added coupons to tables that paid in cash after the fact—so she could collect the extra money in tips.

“When I was a server and used to add coupons to my cash tables after they paid so I could have a bigger tip,” user @notyouraveragesahm wrote via text overlay on the video.

“I was making money one way or another,” she captioned the TikTok.

The former server’s video received over 870,000 views, with many other users showing support for her in the comments.

“I mean, as the customer I’m still paying the same amount either way so, I’m all for this,” one user said.

“I’m going to have to start paying cash so y’all can make more,” another said.

“Remember: if you see a coworker doing this, no you [didn’t],” a third user commented.

“Okay but if they actually paid servers then they wouldn’t have to hustle. They got bills and kids,” a fourth added.

Several others admitted to doing the same thing at their own restaurants.

“Omfg used to do this at this chain restaurant i worked at, easily have stolen like 1000$ from that place skaksksksksk,” one user said.

“I used to have a manager that would void one entree or a round of drinks if they tipped horribly, cash or [credit card],” another said.

“Lmao we used to drive around after shift to find newspapers w/ the [$]10 off [coupons] & buy every newspaper before another server could buy them all,” a third user said.

However, many users warned of the consequences of trying to get larger tips.

“Our corporate office tracked stuff like this and I was #1 in the whole company before I got fired,” one user said.

“I caught an employee doing this. It was obvious after entire tabs were voided all day. She was a finance major,” another commented.

“I had an employee do this for almost 3 years before corporate caught him, he’s in prison for felony theft,” a third wrote.

Though in response to one user who said multiple people at her job were fired for doing the same thing, the TikTok creator said there were tons of server jobs they could take instead.

“I thought about that but serving jobs are a dime a dozen & that job sucked ass,” she said.

The Daily Dot reached out to user @notyouraveragesahm via a TikTok comment.