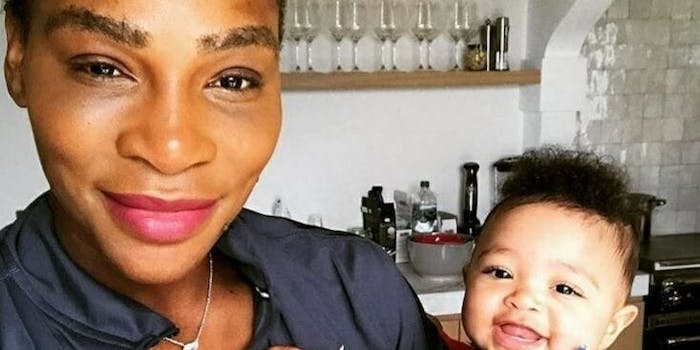 With tennis superstar Serena Williams back on the court 10 months after the birth of her first child, it had to be expected that she would probably miss some of her daughter’s early-life highlights as she travels, trains, and plays.

But if one of her latest tweets is any indication, it hit her harder than perhaps she might have expected.

Early Saturday morning, this is what Williams posted.

She took her first steps… I was training and missed it. I cried.

Immediately, other mothers and parents tried to come to her rescue, telling her that if the mom isn’t there to witness the milestone, then it really never happened.

I wholeheartedly agree. It only counts the first time she does it for you.

I'm a housewife and was in the next room and I missed it. With both of the twins. Please don't feel bad. Be happy for her and be ready for the running after her.

I took my 1st child all the way to Israel on a trade mission. During a meeting I heard cheering out in the waiting area …. Yup, staff and husband and assorted strangers saw her 1st steps. It all turns out okay. #workingmomsrock

Williams, one of the greatest tennis players of all time, has been open about her new experiences with motherhood. In May, she told Harpers Bazaar that she had suffered post-partum depression.

“Honestly, sometimes I still think I have to deal with it,” she said. “I think people need to talk about it more because it’s almost like the fourth trimester, it’s part of the pregnancy. I remember one day, I couldn’t find Olympia’s bottle and I got so upset I started crying… because I wanted to be perfect for her.”

Before Wimbledon began, Williams also discussed breastfeeding, saying, via People, that she originally had planned to stop in January.

Then, she had a talk with her daughter.

“I literally sat Olympia in my arms and I talked to her and we prayed about it,” she said. “And I told her, ‘Look, I’m gonna stop. Mommy has to do this.’ I cried a little bit—not as much as I thought I [would]. And she was fine.”

Williams has also been fine on the court. Though she’s been sporadic in the few tournaments she’s played this year as she adjusts to motherhood, Williams hasn’t lost a set so far at this year’s Wimbledon, and she plays her fourth-round match on Monday morning.