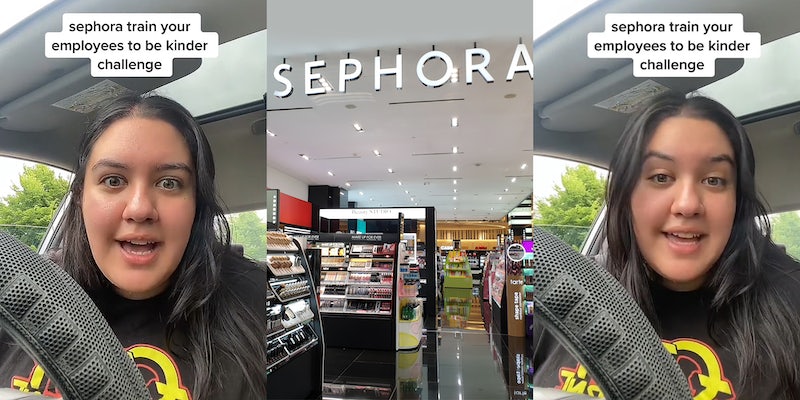 ‘Sephora train your employees to be kinder challenge’: TikToker calls out mistreatment at Sephora location

'I know makeup. And I just happen to not be wearing any and you treat me like this?'

A TikToker has gone viral after calling out alleged mistreatment she experienced from employees at a Sephora location.

In a video with over 570,000 views, user Jessi (@okjessi) explains that, after visiting a London, Ontario Sephora location, she was smirked at and ignored, which she says may have been partly due to the fact that she was not wearing makeup at the time.

@okjessi anyway if ur a beginner in makeup – you deserve as much respect as a seasoned artist and dont let anyone make u feel otherwise!!!!! #sephora #sephoracanada #rudeemployee #fyp #foryou ♬ original sound – jessi

In the video, she recounts her experience, saying that employees ignored her when she asked for assistance and essentially made her feel unwelcome in the store.

“I’ve been published. I know makeup. And I just happen to not be wearing any and you treat me like this?” she asks in the video.

Later, she clarified that her point in making the video was in part to emphasize that the makeup community should be accepting, especially to those who might not be well-versed in cosmetics.

“Even if someone has no experience with makeup and they have a million questions, it’s your job to help people navigate the makeup industry and products and formulas. That’s what you’re there for,” she explains.

“I think that these megacorporations…that have kind of monopolized the makeup industry, in terms of being the one-stop shop for all these brands, need to better in training their employees to just not be so cold and rude to people who might be beginners, and put them off of wanting to wear makeup ever,” she concludes. “Like, really? Do better.”

In a follow-up, she says she spoke with Sephora over Twitter, who claimed that they were taking her concerns seriously.

In this video and others, Jessi noted that it is possible that all of the employees were just having a bad day. Furthermore, she stressed that she did not want any of the employees in question to be reprimanded or get into trouble for this behavior. Rather, she was simply observing a common trend in the industry that she feels needs to change.

“It makes me feel better and also simultaneously sad that this is so common in the beauty industry,” she says. “Everyone has a place here. This is supposed to be an inclusive thing, not an exclusive thing.”

She also noted that many users in the comments shared similar stories to her own.

“I have been to @sephora once, and I will never go again,” one user wrote. “Tired of mean girls.”

“I shouldnt have to worry about dressing up to go to a store so they wont be rude to me,” another added.

“Every time I have been in a Sephora, this has been my experience. I hate it here,” a further user claimed. “Drugstore all the way.”

One alleged former Sephora employee also claimed to have a negative work experience there. “Working at Sephora traumatized me,” they said. “I was bullied by all my managment , made fun of in front of my co workers and saw everyone cry in the breakroom.”

A further follow-up details how Jessi thought she was potentially being “too sensitive” or “overreacting” when she posted her initial video. Seeing the number of similar experiences from viewers, however, made her feel vindicated.

This video also reveals the email Sephora sent Jessi in response to her query, in which the company says they have forwarded her feedback to both retail leadership and the district manager of the location.

The Daily Dot reached out to Jessi via Instagram DM and Sephora via email.