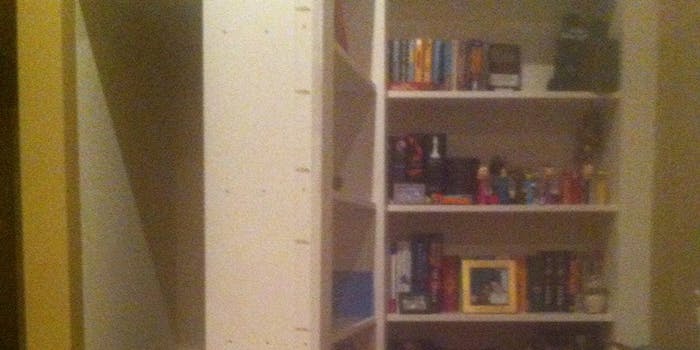 This series of photos on imgur will have you checking your house for hidden spaces.

Imgur is rapidly overtaking sites like Reddit and 4chan as a repository of viral meme-making and unexpected community, but now, thanks to one extremely freaky house, it may have just raised the bar for online scary stories.

Creepypasta, the Internet equivalent of scary urban legends, is usually passed around in text form, so it can be easily copied and pasted. But Imgur’s image-ready format was perfect for the terrifying story user TwoBiteBrownie had to tell last week. The Imgur user, who claims to be 15 years old, posted a picture of what he claimed was a bookcase in his new house, one with a terrifying twist: when the bookshelf revealed a secret passage, he realized that not only was his house bigger on the inside—but he wasn’t alone.

It’s House of Leaves meets People Under the Stairs.

“I moved into a house about a year ago,” TwoBiteBrownie writes, showing a picture of a large bookcase in the user’s parents’ room. “My little brother and me were messing around, and I pushed him into the shelf. When he fell, he pulled out the bookshelf with him.”

The bookshelf allegedly opens up to reveal not only a secret space in the room, but a spiral staircase.

“There’s a fucking spiral staircase in here. So we went down.. bad idea.” 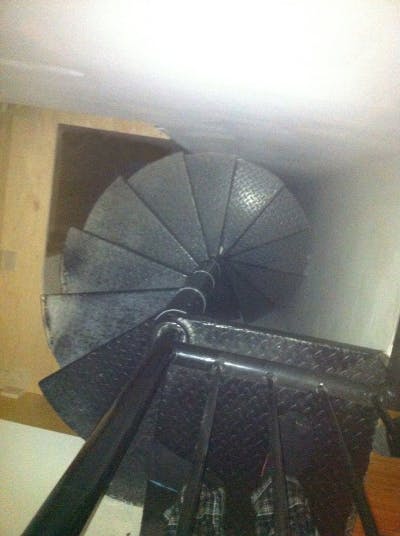 According to the photos and the attached story, the Imgur user and his brother discovered that the staircase leads to a mysterious crawlspace. From there… well, if you guessed mysterious unseen people living in a creeptastic crawlspace complete with creepy dolls, give yourself points for knowing your horror tropes. 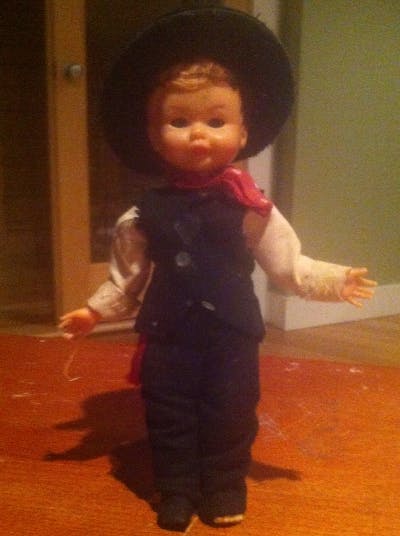 TwoBiteBrownie posted an update the day after his first post to say that the police had confiscated most of their mysterious visitor’s belongings and had no explanation for why they were in the house, or how they could have repeatedly snuck into the house and into the parents’ bedroom.

Many users were skeptical of the photos, and some compared the lack of scary follow-up to the anticlimactic “What’s in the safe?” controversy that took place earlier this year on the image upload website—a lot of buildup without any ultimate payoff. But the payoff may have come already.

“Just wanted to let you know that since i saw your post yesterday I have shaken every book case in my house at least twice,” commented one freaked-out Imgur user.

So is it real? We’re skeptical. Like other classic creepypasta like Ted’s Caving Journal and the Dionae House, TwoBiteBrownie gives you realistic “evidence” blended with the reassuring voice of a narrator who’s just as freaked out as you are. But many Imgur users pointed out the unlikelihood of a squatter remaining in the house while the new owners were inhabiting it. It could be that the “evidence” in this case simply packed up and relocated to some other secret passage in some other house.

“My parents said that I was never allowed back in there again, and believe me, I tried,” wrote TwoBiteBrownie. “They actually went inside and boarded the whole place up.”

If only the rest of us could board up our nightmares.