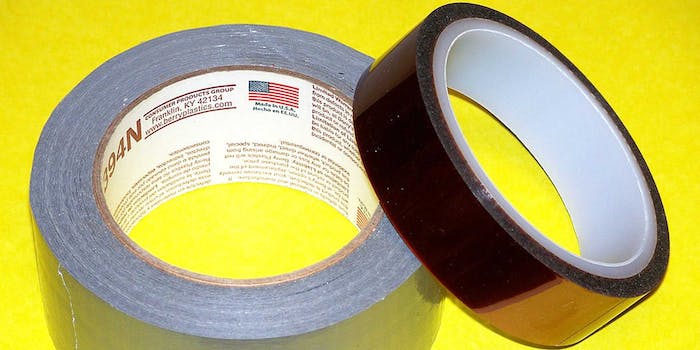 She did it to defend the first woman.

North Carolina woman Katie Brown (also known as Katharine Lemansky) posted a photo last week of her dog with his mouth taped shut, and the Internet went completely berserk over the ill-treatment of her pet. But that wasn’t enough of a deterrent for a woman named Attisyn Chadwick, who took to Facebook to defend Brown by sharing a video of her doing the same to her dog.

Brown was arrested on Monday and charged with misdemeanor animal cruelty. Chadwick responded by posting her own video; the next day, the sheriff’s office in Lincoln, Wyoming, announced it would charge her with animal cruelty as well, according to Fox 8.

Chadwick has since taken down her taping video, but a copy of it was captured by a user on the site Down Facebook. It shows Chadwick taping her dog’s mouth shut and then un-taping it to prove that it doesn’t actually hurt the dog.

I too am an animal lover, believe it or not. The whole point is because I do not think Katie and her dog should have to be separated, even if it is temporary. They obviously have a bond, that just because you don’t understand, doesn’t make it wrong. She felt comfortable enough to post a photo because yes, the dog looked silly after misbehaving. (And she taped up, so when she pulls down, she pulls with the growth of the fur which if it hurts at all, won’t hurt very much) Just like I felt comfortable enough to make a video in her defense.

But after drawing the ire of the Internet, and reportedly receiving threats against her family, Chadwick posted a video of herself holding her baby and apologizing for what she did to her dog.

In the video caption, she wrote, “I’ve done all I can do about it, and I hope people can forgive my stupidity of this matter. The news didnt even air my apology so I made my own because it needs to be heard.”