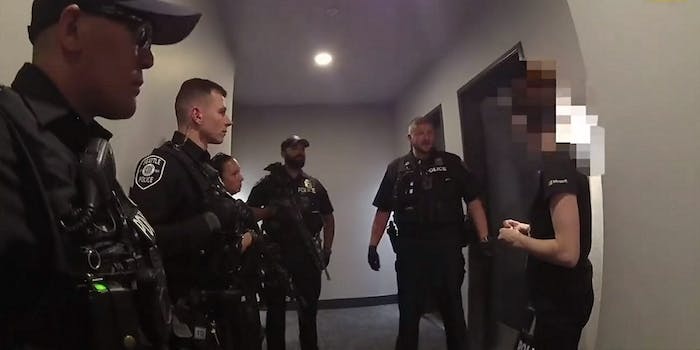 It just places responsibility on the victim, some say.

The Seattle Police Department just launched new safety measures to protect streamers and online personalities from “swatting,” or when a perpetrator phones a fake 911 call in order to send heavily armed police officers to an innocent person’s house. But some internet users think Seattle law enforcement’s solutions place too much onus on the victim and not enough on punishing the aggressor—or policing the police.

In a new page titled “Protect Yourself from Swatting,” the Seattle police revealed that it is working with services Smart 911 and Rave Mobile Safety so residents can create web profiles warning police officers and 911 dispatchers if they are at-risk for swatting. Under Rave Mobile, streamers, online personalities, and other potential victims can tell 911 call takers if swatting concerns are a serious issue due to their career or online persona. From there, if a 911 call is sent to the streamer’s house, the 911 operator will check the resident’s background and warn officers about the resident’s swatting risk.

“If swatting concerns have been registered, this information will be shared with responding officers, who will still proceed to the call,” the Seattle Police Department reports on its official anti-swatting page. “If no location profile exists, officers will still continue to the call. Nothing about this solution is designed to minimize or slow emergency services. At the same time, if information is available, it is more useful for responding officers to have it than to not.”

The Seattle Police Department also demonstrated police protocol in action through a short PSA video detailing a real-life swatting incident. From there, the PSA introduces viewers to the Rave Mobile Safety profile system, which is relatively straightforward to set up. Users can even expand on their risk status under the profile’s “Other Access Info” box.

The new safety feature was first reported by Ars Technica, which warned that every single 911 call “will still receive standard police response, whether or not any swatting concerns are filed.” Not to mention, the profile system still puts the onus on the victim to warn police if they are at risk for swatting. Some internet users have since criticized the Seattle Police Department’s response, noting that there needs to be better police training and criminal prosecution for swatting incidents.

This is the Seattle Police Department transferring the responsibility of SWAT'ing to victims. At some point, police departments will have to assume responsibility for filtering hoax calls. I don't have the answer here, but one is desperately needed. https://t.co/uACFdWODEP

They need to start charging the ppl who do this with serious felonies and prison time.

How about mandatory minimum sentencing? If you do this, and you're caught, it's 10 years in federal prison

Others believe swatting is tied to much larger concerns about American policing amid an increasingly militarized police force.

Why not observe a place before you bust in shooting 'list's of names with attribution to activities' is not the way to go on this…yes, I know…"It's to protect yourself from harm!"…..

Heres a way ro defeat it stop acting like everything needs to be a military operation. Stop dressing up like soliders and kicking peoples doors in before you even confirm theres a threat inside. #calmtheFdown

You know what would be even better? If SeattlePD didn't have heavily armed teams that broke into houses to shoot people inside. How is that at all a valid part of law enforcement?

Yet some are welcoming the new anti-swatting measures with open arms. It may not be perfect, but the Seattle Police Department is taking a step in the right direction to protect streamers.

If an opt in registry prevents death or injuries caused by idiots, I say this is a good idea on the part of the Seattle P.D.

That's great! I was doxxed the other day and so were some of my friends. We are all streamers, some had pizzas sent to their house, swatting is usually what comes after the pizza. We filed with our respective local police. It's really great to see you guys talking about this!

This is interesting and I have concerns but I’m liking that we trying to figure out how to be reasonable. Trying is the key word here but we still need to talk about database protection, PII leaking, police engadgment actions, de-escalation training.

Not that there are as many broadcasters in my city. But I'd love it if @EauClairePD did this as well. I think cities around the world should take this into consideration. #Twitch #watchmixer #YouTube

The Seattle Police Department stresses that the 911 profile system is an attempt to come up with a solution in a world that doesn’t quite know how to deal with swatting. So while it may be imperfect, at least the police are taking the issue seriously and figuring out how to protect victims from, ironically enough, the police officers themselves.

“This phenomenon, which is a national issue, is quite frankly causing a tremendous amount of fear and anxiety in the community that we serve,” Seattle Police Department Public Affairs Director Sean Whitcomb told Ars Technica. “We know swatting has ended in tragedy in its most vile form. At its most general form, it’s a way to intimidate or harass people. That’s just wrong.”