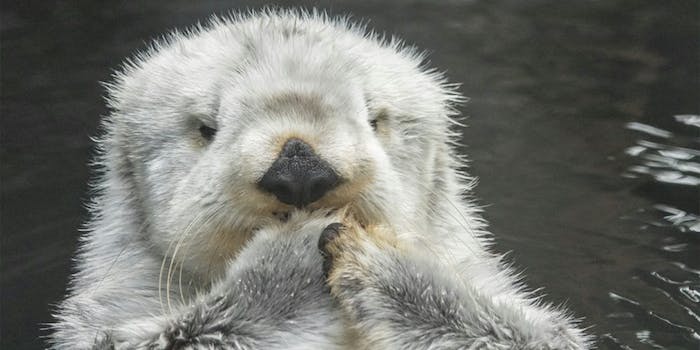 RIP, Eddie, who will live on in our GIFs.

Eddie was almost 21, which is six years longer than most male sea otters tend to live, according to the Oregon Zoo. He was euthanized on Thursday because of his deteriorating health.

He was an orphan pup when he was rescued off the California coast in 1988 and taken to Monterey Bay Aquarium in California, which, in a wild coincidence, got heat for posting an insensitive comment with the photo of another otter this week (it’s since apologized). Eddie came to the Oregon Zoo in 2012.

He rose to fame in 2013, as one of the most famous animals on the internet, after his trainer taught him how to dunk a basketball as treatment for his arthritis. He was also often caught pleasuring himself. Now, the internet grieves.

On his way to Harambe. RIP

His tombstone reads, "He did it because he could".

RIP gonna crank one out in remembrance

MY SISTER SAID THAT SHE WOULD DIE TO SAVE EDDIE THE SEA OTTER pic.twitter.com/30F8uWTsWZ

Eddie is survived by two other sea otters, Lincoln and Juno.