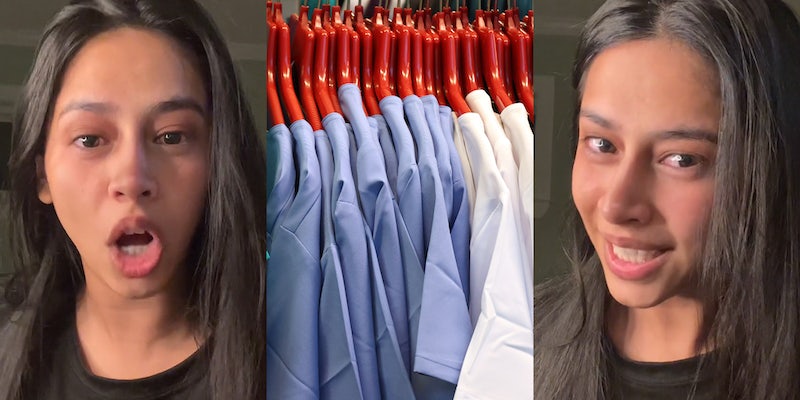 'Should I quit with 2 weeks notice or just not show up??'

In a viral video, TikToker Dhwanika (@dhwanika01) shared an interaction with a rude customer at the retail scrub store she works at. The video has garnered over 734,200 views since it was shared yesterday.

“I swear to God, if you’re thinking to get a job in customer service, please don’t,” she urges at the beginning of the clip.

Dhwanika, who has been working at the store for two years, addressed a woman who walked into the store 30 minutes before closing. She made sure the customer was aware of the store’s hours and proceeded to let the woman shop around.

Eight minutes later, the woman asked Dhwanika to grab a few things and continued to try clothes on. At this point, the creator also let the woman know that the register closed in two minutes, but she was still able to try on the clothes.

At 7:05 pm, five minutes after closing, Dhwanika asked if there were any items that the woman wasn’t considering so that she could get the store ready for the opener the next morning.

“She straight up looks at me and says ‘Well, if you’re getting so late I’m just going to leave this and you can ring it out tomorrow,’” Dhwanika recalls. The worker then told her she could check out her items now, holding off the closing of the register.

Dhwanika then told the woman that she wasn’t “doing her any favors” by checking out now, causing the woman to get an attitude. The customer allegedly told her that she will just take photos of the items and not buy from them again.

However, the woman proceeded to take another ten minutes trying things on, before purchasing $200 worth of clothing. Afterward, she allegedly posted a review pertaining to Dhwanika’s customer service. She even requested that the TikToker be fired.

“Bitch, I’ve been working here for two years,” Dhwanika says in the clip. “That store works with me.”

The creator even spoke directly to the woman by chance that she was seeing the TikTok.

In the comments section, users with retail experience agreed with Dhwanika.

“People are MEAN,” one user said.

“Working in retail is a nightmare and you should get paid extra for just dealing with people,” another commented.

“Retail is the worst. I swear the last 5 years of retail work has stolen my soul,” a third user said.

Dhwanika then added an update in her comments section.

“Update: my manager said ‘I should be more respectful’ so: should I quit with 2 weeks notice or just not show up??” she asked.

In a second video, Dhwanika shares her manager’s response to the customer’s review.

“So until yesterday, I was mad that the lady was so nasty to me, talked to me in such a bad manner,” she says. “This morning, I look at the review and my manager…let me show you what he wrote.”

“Hi Diana, please reach out to me personally so I can better understand your experience and apply changes as necessary,” the comment from the manager reads.

Dhwanika then revealed that she does plan on quitting. “I am not taking this BS,” she says in the follow-up video.

In the comments section, users shared their opinions and debated how managers should treat their employees.

“Seems like the manager is more concerned about customers reviews/sales than the welfare of his personnel,” one user said.

“Managers and owners need to learn to stand beside their employees if they’ve done nothing wrong,” another shared.

The Daily Dot reached out to Dhwanika via email.