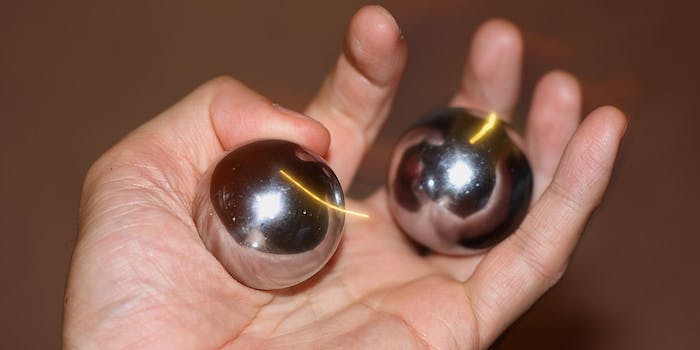 Photo via WhopperSangwich/Flickr (CC BY 2.0)

Meet the winners of the international scrotal beauty pageant

Everyone apparently finds balls to be gross.

When the winners of the first international vagina beauty contest were announced in July, some online spectators were understandably skeptical of both the intent and the results. But fear not, concerned feminists.

The same people who brought you the controversial, crowdsourced vagina pageant have turned their focus onto male genitalia—specifically, balls.

The Autoblow Balls Contest‘s rules of entry, and its prizes, are pretty much identical to those of the vaginal version. Each online beauty pageant was created and sponsored by Autoblow2, a company that makes blowjob-simulating sex toys for men. In a November video announcing the contest, Autoblow’s Brian Sloan asked the Internet to “join me in celebrating scrotal beauty and diversity.”

But while this contest’s winning ball sacks (view the extremely NSFW leaderboard here) will be subject to 3D scanners and molded into objets d’ art (just like the winning vulvas were), the overall audience response to the contestants was drastically different.

The results of the vaginal beauty contest were compiled into data sets and closely analyzed by scientists to determine what the public found beautiful—based on 2,766,671 ratings. The data overview showed clear preferences among the contest’s 134,707 voters; the majority preferred smallish vulvas with “non-protruding, simple labia.”

But the breathtaking scientific analysis of the beautiful balls contest only revealed two main voter reactions: The top three winners all had “unusually large scrotums,” but more importantly, almost every contestant got unusually low scores regardless of appearance.

“Now I know why the scrotum has always lived in the shadows,” said Sloan in a statement emailed to the Daily Dot on Thursday. “Because people think it’s ugly.”

More than 1,000 men from 35 countries entered their balls in the contest, and over a five-week period in November and December, they were assessed by 20,315 largely unimpressed voters.

“Voters did not find any of the 6 classes to be more visually appealing than another; the data showed that voters found all scrotum styles equally unappealing,” read the resulting “Balls Paper” data analysis. “All 6 classes of scrotums received average scores ranging from 3.35 to 3.6 out of 10 compared with 4.3 to 5.3 out of 10 for vulvas.”

The scientists analyzed the data for preferences based on categories like testicle symmetry and “bagginess,” splitting the entries up into six distinct classes of appearance and shape. But the results only showed that voters didn’t seem to care much for differences at all—instead, they found almost all types of balls unattractive.

The guy with the best testes, an Australian, managed to pull a top score of 6.4 out of 10—followed by second and third-place winners from the United States. In comparison, the British winner of the vulva contest scored a 7.7. Her genitals, as Sloan explained in the video above, were scanned and modeled for the production of a sex toy.

The winning balls, however, are going to become bookends and paperweights.

Photo via WhopperSangwich/Flickr (CC BY 2.0)