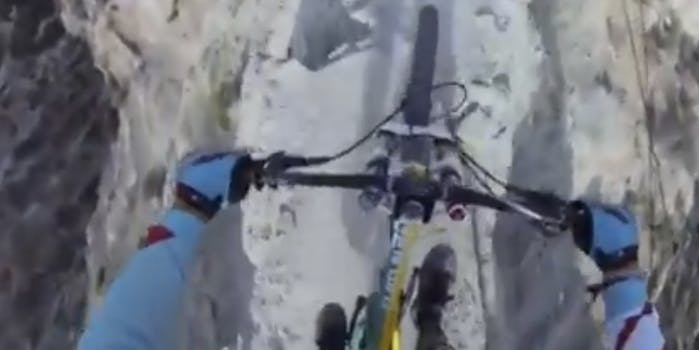 Take a GoPro ride downhill with this fearless mountain biker

I'll stick to paved areas, thanks.

In the first place, there’s street biking, which isn’t all that safe to begin with. Then there’s offroad biking, which makes up for a lack of careless motorists with countless natural dangers. Finally, you have the sort of extreme biking that entails using the side of a mountain as a customized obstacle course—a radical stunt you can experience for yourself via GoPro camera.

It’s all a bit dizzying and bone-rattling, but don’t feel bad: even the cyclist has to pause once to collect himself, later emitting a worried “Whoa!” when he comes off a particularly diabolical ramp.

Public service announcement to would-be daredevils: it may feel, after watching that, as if you can execute a mid-air 360º spin over treacherous rocks on a mountain bike. But no, you can’t.