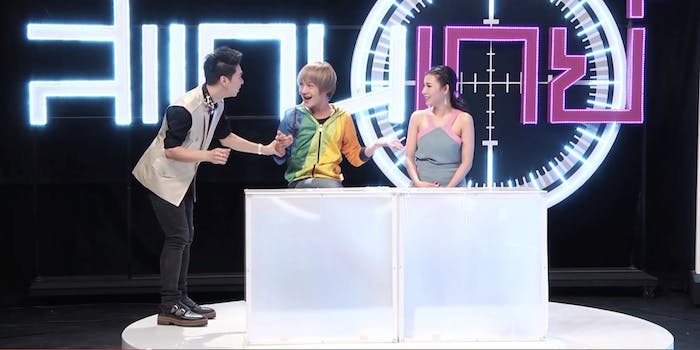 "In Thailand, it’s like a celebration of your identity.”

Every once in a while, you’ll come across something on the Internet so delightfully, ridiculously bizarre that it genuinely makes you wonder how it could exist in the world without everyone already obsessing over it. They’re like doge before anyone knew about it, little gold nuggets in the crevices of the Internet where few viral content aggregators dare to plumb.

Such is the case with ScanGay, a new webseries game show that’s taken Thailand by storm. The premise is simple: A (usually youthful, well-built) male is invited onto the show, and a team of panelists are asked to determine if the contestant is “man” (heterosexual) or “gay” (gay).

The show is hosted by Eakkachai “Eakky” Eueasangkomset, an openly gay Thai pop star formerly of the boy band U.H.T.

The show features two celebrity guests per episode, usually actors, pop stars, or famous DJs, who have three minutes to determine if the male contestant is gay or straight. If they’re wrong (which they usually are), the contestant gets 10,000 THB, or about $300.

First, Eakky asks the panelists to rate their “gaydar” (below is a translation of the dialogue from the second episode):

EAKKY: Alright, it seems you guys have experience scanning for a gay. Pai, how do you think your gaydar works from 1 to 10?
PAI: Obviously, very well … 8. I can smell gays. (Pai smells PK) No, he’s not gay. I didn’t smell any gay from him.
EAKKY: If he were gay. He will be an ugly gay. Disqualified from being gay. Haha.

PK: May I ask you something personal? What is the color of the underwear you’re wearing?
BIRD: White.
PAI and EAKKY: Oh, white!!!
PK: Boxers or briefs?
BIRD: Boxers?
EAKKY: Nylon?

The panelists also ask Bird what his job is, whether he likes horror movies, and to complete the lyrics of the 1978 Gloria Gaynor disco hit “I Will Survive.”

Unfortunately, because there’s only one video available on YouTube with English subtitles, the interrogation segment is difficult to follow. But it’s worth it for the lead-up to the big reveal at the end, which is by far the best part of ScanGay.

Basically, the contestant stands behind a giant pink door while a barometer vacillates between “man” and “gay.” The lights flash on and off and a puff of smoke envelops the stage, which is Eakky and the contestants’ cue to flip the eff out:

THE ANTICIPATION IS KILLING US.

Then the contestant emerges and does a little pantomime intended to represent his sexual orientation.

See, here’s a “man” riding out on a motorcycle.

And here’s a fakeout reveal where the contestant comes out with a man and woman, dances suggestively with both, kicks the man offstage, and embraces the woman, revealing his hetero orientation:

Of course, to politically correct Americans, the premise of “ScanGay” seems incredibly problematic, as do the absurd, reductive gender and sexuality tropes imposed on both the “men” and “gays” (in Thai, the word for “gay” roughly translates into “effeminate,” and it’s not considered a pejorative term). We tend to think of coming out or revealing one’s sexuality to the world as a solitary, intensely personal process, so to see it exposed on a game show in such a wildly flamboyant manner is jarring, to say the least.

In mainstream Thai culture, however, shows like ScanGay are not considered offensive, or even remotely controversial. In fact, since it premiered on YouTube last year, ScanGay has amassed quite a following. The pilot has more than a million views, and the latest episode has a little over 179,000. That’s not because Thai viewers are virulent homophobes who view gays and lesbians as mincing, disco-lip-syncing, boa-wearing self-parodies. In comparison to other Asian countries, Thailand has a reputation for being quite progressive in terms of its treatment of LGBT people. Although civil unions between same-sex partners are not currently recognized, it is illegal to discriminate against LGBT people, and cities like Bangkok and Phuket are considered nexuses of global LGBT culture.

When I asked my friend Poy, whose family is from Thailand, about ScanGay, she had this to say: “In the U.S., being progressive is not talking about our sexuality. In Thailand, it’s totally the opposite. Not to say there’s no homophobia or prejudice, but there’s a lot more openness in talking about sexuality and more ownership of being gay and being part of gay culture.

If we project our American values and political views on it [shows like ScanGay and stereotypical depictions of LGBT people, then yeah, it comes off as offensive, but in Thailand it’s like a celebration of your identity.”