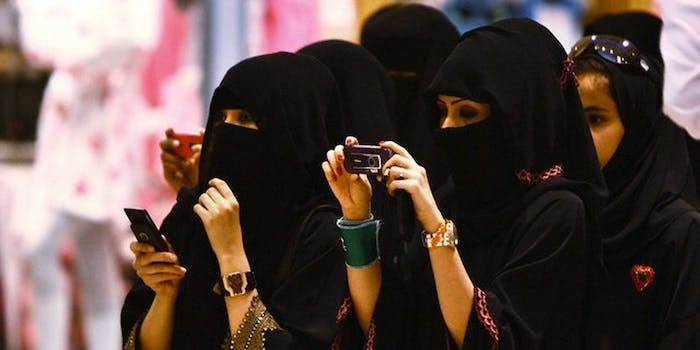 Photo via Tribes of the World/Flickr

Saudi women will be able to vote for the first time this year—as long as they can get a male relative or friend to drive them to the polling station.

The first wave of women voters began registering on Sunday in the two holy cities of Medina and Mecca. Registration in the rest of the kingdom doesn’t begin until August 23.

Safinaz Abu Al-Shamat, a teacher at a school in Mecca, and Jamal Al-Saadi, a business owner who chaired a committee of Medina’s Chamber of Commerce, were the first two women to register on Sunday. They told the Saudi Gazette that they were fully prepared for the landmark event.

“I was quite ready for this day,” Saadi told the Gazette. “I have prepared all the documents needed to obtain a voter’s card. This is a nice experience to go through. We are just at the beginning of the road.”

Saadi also hinted at a desire to run for election herself. “I may have such ambitions. I love to go through this experience till the very end.”

Women didn’t just gain the right to vote in Saudi Arabia; they can now also run for political office, which will present an interesting challenge once a woman is elected and finds herself unable to drive to work.

Twitter users were all too ready to call out this striking irony.

Women in Saudi Arabia are, for the first time, allowed to vote. They still aren't allowed to drive. http://t.co/razC0Antfb

Congrats Saudi women you can now vote… as long as your husband agrees go with & drive you to the polling station https://t.co/eTHOGd2IYd

Saudi women can vote but won't be able to drive themselves to the voting stations… Ridiculous. http://t.co/52wKIDrmLm

In addition to driving, women in Saudi Arabia are also forbidden from swimming in public pools; working out in gyms; trying on clothes in store dressing rooms; entering cemeteries; reading fashion magazines; wearing anything other than a full abaya covering their face, hair, and body; and going anywhere without a male relative or a chaperone known as a mahram.

Saudi women also cannot get divorced or open their own bank accounts.

Photo via Tribes of the World/Flickr (CC BY SA 2.0)