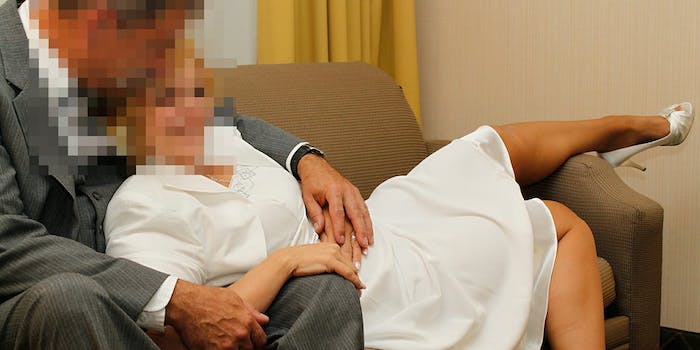 One lawyer says she 'defamed' her spouse with the video.

A woman in Saudi Arabia may spend a year in prison after she filmed her husband allegedly groping, kissing and grabbing the family maid, according to reports.

Saudi lawyer Majid Qaroob told the newspaper Sada that the wife had defamed her spouse and violated the kingdom‘s strict cybercrime laws when she captured his groping on her phone and published it on Facebook along with the caption: “The minimum punishment for this husband is to scandalize him.” The video went viral and was shared thousands of times on YouTube before it was taken offline.

The Mirror newspaper in the United Kingdom is currently hosting the video on its website.

“This law includes stiff punishment for anyone using mobile phones with [a] camera or other equipment to photograph others and defame them,” Qaroob said. You can read a copy of the kingdom’s cybercrime law here.

Earlier this year, a 32-year-old Saudi woman was convicted of defaming another of the kingdom’s citizens using the WhatsApp private message service,according to news reports. She was sentenced to two months in prison and 70 lashes. She was also ordered to pay a $5,000 fine.

Saudi Arabia’s interpretation of Sharia law in criminal proceedings often results in punishments considered brutal by Western standards. An analysis by Vocativ found that 16 “crimes” can result in a death sentence in the kingdom, including sorcery, drug dealing and consensual gay sex with an adult. The country has also beheaded a record number of people in 2015.

Photo via Jenn Durfey/Flickr (CC BY 2.0) | Remix by Jason Reed