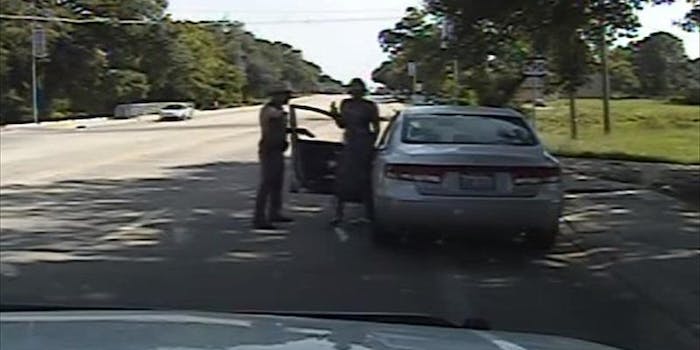 Is this a technical glitch, as the cops say, or are they hiding something?

Earlier this month, a 28-year-old African American woman named Sandra Bland was pulled over for a routine traffic stop while driving through Texas. After an altercation with the officer who pulled her over for failing to use a turn signal, Bland was taken to jail in Waller County, northwest of Houston. A few days later, Bland was dead, allegedly having hung herself with a plastic bag.

But with Bland’s friends and family insisting that she would never take her own life, the story has raised suspicions that the police department was covering up something more disturbing.

The Texas Department of Public Safety announced a full investigation in response to widespread calls on social media for formal scrutiny of Bland’s death. As part of that process, the department on Tuesday released a 52-minute video of the traffic stop.

The video depicts an interaction between a police officer and a skeptical motorist that gradually escalates to Bland being physically pulled from her car, thrown to the ground, and handcuffed. The events depicted on the video were instantly controversial. But in the hours since its release, people have begun alleging that law-enforcement officials faked it to avoid showing what actually happened.

The video released by police contains numerous unexplained jumps and cuts. Cars driving along side of the road suddenly disappear. Other cars are shown driving by multiple times, indicating that portions of the video were likely looped.

An article on CopsCaughtOnTape.com described what an astute observer would notice about the video’s many irregularities.

A man leaves the truck in the center of the frame at 25:05. For the next 15 seconds, he walks toward the right of the frame and leaves. At 25:19, he suddenly appears again, promptly disappears, then returns at 25:22. The same footage of him walking is subsequently repeated.  At 32:37, a white car drives into the left side of the frame, then promptly disappears in the middle of the road. Seconds later, the same car drives back into the frame and subsequently turns left. This footage is later looped several times. A different white car also drives into the left side of the frame and turns left from 32:49 to 32:59. The previous white car again briefly enters the frame at 33:04, and once more at 33:06, yet it suddenly disappears both times. When these cuts are made in the footage, the lights on top of the truck in the center of the frame also abruptly cut out. At 33:08, the exact same footage from 32:37 is repeated, followed by the same second white car at 33:17.

Independent journalist Ben Norton posted his own in-depth breakdown of the video’s problems.

For its part, the Texas Department of Public Safety has insisted that the video wasn’t intentionally edited to avoid revealing what happened.

“There was a technical issue during posting later in the video, and we are working to correct,” Texas Department of Public Safety spokesperson Tom Vinger told CNN.

Nevertheless, to the many people who were already skeptical of the official story of Bland’s death, the situation was yet another example of law-enforcement officials covering for one of their own in a case involving a suspicious death.

I edit footage for a living. But anyone can see that this official video has been cut. Read/watch. Why? #SandraBland http://t.co/2JXy9Zc4Y3

If you can watch even the edited #SandraBland video and blame Bland for the outcome, then you're a racist. Own it.

They clumsily edited the dashcam video. Do you think they would hesitate to tamper with the jail video? #SandraBland

A Change.org petition created on Wednesday morning calls on the Texas Department of Public Safety to release the full, unedited video.

On Wednesday, authorities deleted the original 52-minute video, which can still be found mirrored on unofficial YouTube channels, and replaced it with one that is three minutes shorter.

Here is the new video:

Update 4:05pm CT, July 22: Added new version of video after the old one was deleted.