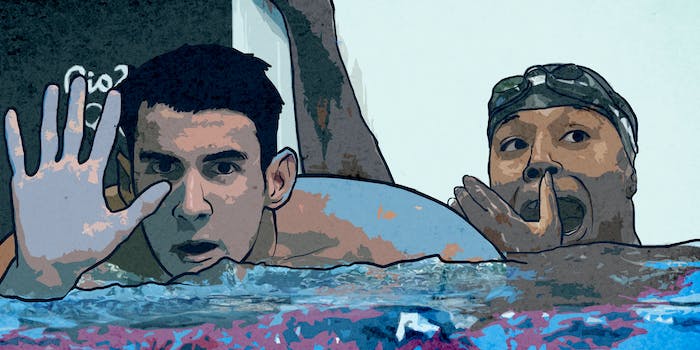 The media has a long history of reducing women to a race, a wife, or a lesser version of a male athlete.

Simone Manuel made history Thursday night when she became the first black female athlete to win a medal in Olympic swimming. But according to the San Jose Mercury-News, Manuel was just some nameless African-American who happened to share an event with Michael Phelps.

The Mercury-News was blasted on Twitter for the headline, which not only left out Manuel’s name while confusingly promoting Michael Phelps—but also referred to her by her race only.

Congrats to Simone Manuel who shared a goal with an European-American https://t.co/xELLyNoYk0

The headline—which has since been changed, with an apology added—is just the latest controversy among an ongoing series of criticisms toward media coverage reducing female athletes to secondary status. While much of the outrage directed at the Mercury-News was related to the Olympic record-breaker being referred to by race alone, the dismissive headline is similar to others that have all-but-erased female athletes even while covering their achievements.

An August 7 tweet from the Chicago Tribune refers to three-time Olympic trap shooting medalist Corey Cogdell-Unrein simply as the “wife of a Bears’ lineman.” The tweet was not removed from the social network, and remains flooded with replies criticizing the newspaper’s focus on the athlete’s marital status rather than her own name or illustrious career.

Olympic gold medalist Katie Ledecky, who holds nine out of the top 10 records in women’s 400 freestyle swimming, is arguably the best female Olympic swimmer of all time. Yet she continues to be called “the female Michael Phelps.” In a Daily Mail article about her first gold win, she didn’t appear until after dozens of photos of Phelps and at least seven of Phelps’s baby—and was referred to as an athlete who “swims like a man.”

When a headline about a female Olympic medalist reduces her to a race, a wife, or a lesser copy of a male athlete, it’s a sting to her greater, long-often marginalized community. As writer Dodai Stewart explained in a Fusion article, Simone Manuel’s Olympic win was emotionally charged for many African-Americans because of the historic segregation and shunning of black swimmers at public pools—which sometimes turned violent.

Of course, the athletic history of women is a very recent one. Women weren’t allowed to participate in most sporting events until just a few decades ago, as the violent removal of renegade runner Kathrine Switzer—who crashed the 1967 Boston Marathon only to be charged at by angry male organizers—showed in embarrassing detail.

But the fact is, there are still people who would like the Olympics to belong to an elite class of straight, white male athletes. And whether they like it or not, those days are a thing of the past.