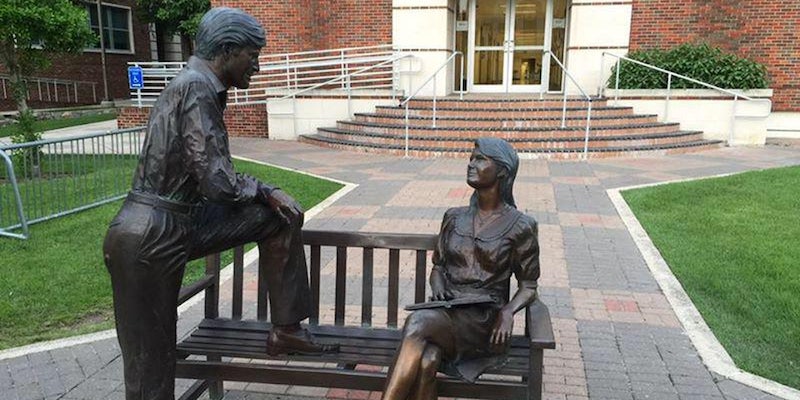 Actually, it's about ethics in bronzing.

Ah, mansplaining. As every woman knows, no matter your level of experience or knowledge in any given subject, you can expect to be undermined, interrupted, railroaded, or otherwise condescended to by a certain brand of man who will make a point of telling you that you’re wrong, misinformed, or under-educated about whatever it is. Even if the subject is one men can’t possibly have first-hand knowledge of, like street harassment, or vaginas, you’re guaranteed to find at least one man, or several hundred, who’ll be happy to explain to women that their experiences of these things are wrong.

The term arose in 2008 in conjunction with Rebecca Solnit’s viral essay “Men explain things to me.” The phenomenon has become so well known that last year “mansplain” was added to the Oxford English Dictionary. But as users of the term know, there are plenty of people who either fail to automatically grasp its meaning, or show up deliberately every time it gets bandied about in order to explain to the word’s users that they’re wrong—thereby proving themselves to be mansplainers of the finest cut.

As the Atlantic pointed out in 2012, the idea of mansplaining is ancient, even if we haven’t had a word for it until now. That’s why this statue took women-friendly Twitter by storm yesterday—it’s been there all along, waiting to be properly scoped out and identified for what it is: Mansplaining in action.

Cathy de la Cruz originally posted the photo, which is a snapshot of a statue on the San Antonio campus of the University of the Incarnate Word. Hilariously, the title of the statue, which was created by sculptor Paul Tadlock, is “New Friends.” Viewers of the photo on social media clearly didn’t think the exchange happening was one that would generate lasting friendship. After de la Cruz’s tweet was reshared by popular Twitter user Ann Friedman, it went viral, and the snark flowed long.

Numerous Twitter users immediately made reference to typical sexist actions like men telling women to smile more, and use of the word “actually.” The statue, with its demonstrative body language, also demonstrates another commonly experienced sexist micro-aggression that’s become known as “manspreading“: a tendency certain men have to sprawl out and take up public spaces, while women cross their legs tightly and attempt to take up as little space as possible.

@SadDiego @terrordith I look at this and all I can see is her thinking, "Dude! Will you shut up and let me get back to my book?!"

@SadDiego @badgrammer She must be learning so many important things about how good he did at golf today.

Perhaps the best thing to come out of the statue’s sudden popularity is the revelation that it’s not alone:

This statue, which sits atop the Purdue University Class of 1950 Lecture Hall, is entitled “The Way it Was.” Although its sculptor, John Seward Jonson, clearly meant it to be emblamatic of a bygone era, the resemblance in body language between the two statues is uncanny.

Apparently, the more things change, the more men’s need to explain them stays the same.