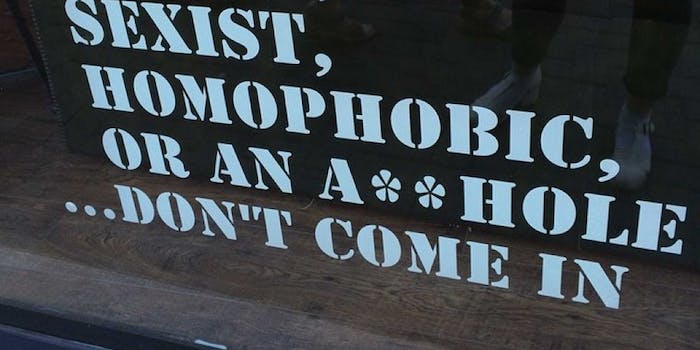 This salon owner shut down homophobes with the coolest sign ever

After an incident with a customer, Russell Hughes decided something had to be done.

If you are Welsh, homophobic, and in need of a haircut, we suggest you take your business to somewhere other than Russell Paul Hairdressing.

The Prestatyn, North Wales salon is run by Russell Hughes. Recently, a customer came in with his wife and son so the young boy could get a haircut. When Hughes said that one of his stylists, 23-year-old Richard Evans, would be doing the job, the man had some strong objections.

“I was already with a client and so I asked my colleague Richard if he would do it,” Hughes told the Daily Post UK. “The man came up to me at that point and said: ‘I’m not being funny, but did you just say that lad’s going to cut my son’s hair’, to which I replied ‘Yes’. He then said, ‘Well, I assume he’s gay and I don’t want him cutting my lad’s hair, so could you do it?’”

After the unfortunate altercation, Hughes decided to make a statement against homophobia by posting a literal statement in the window of his salon.

The sign reads: “If you are racist, sexist, homophobic, or an asshole…don’t come in.”

“I was so shocked,” Evans told the Daily Post. “You don’t expect to be treated like that in this day and age. I’ve worked at the salon for seven years and have never experienced anything like that before.

He added: “I think Russell’s new sign will make sure people like that don’t come in here again.”