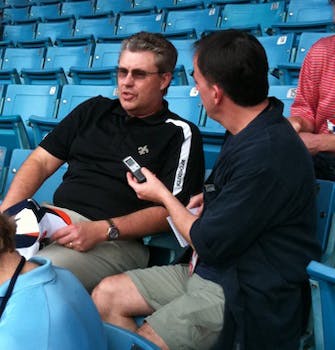 Football coach caught on tape calling for violence against opponents

A documentary filmmaker uploaded footage that he says it shows a New Orleans Saints football coach instructing his team to do violence to opponents.

“We’ve got to do everything in the world to make sure we kill Frank Gore’s head.”

A new YouTube clip brings a chilling voice to a scandal that recently rocked the NFL.

The speaker is reportedly Gregg Williams, former defensive coordinator for the New Orleans Saints, instructing his players to try and concuss the San Francisco 49ers’ star running back in January.

“We want his head sideways,” the voice adds.

Williams was suspended indefinitely from the NFL in March after admitting he installed a “bounty program” that rewarded his players if they could successfully injure members of the other team. The program was so severe that even the Saints head coach was suspended. Sean Payton was banned from the NFL for the entirety of next season, becoming the first head coach ever suspended by the league for any reason.

The audio—played to a black background with no video—comes from the apparently amazing luck of a Peabody Award-winning sports documentary filmmaker, Sean Pamphilon, who captured one of Williams’s speeches Jan 13. In a blog post, Pamphilon notes that coaches usually request Pamphilon turn off all cameras before big speeches, but in this instance, Williams “never asked for such a courtesy.”

Pamphilon uploaded highlights of Williams’s speech to YouTube on Wednesday. Its view count is currently frozen at 302, indicating the clip has quickly gone viral.

In the rest of his speech, Williams specifically names a number of the 49ers’ big names, stating that receiver Michael Crabtree “becomes human when we fuckin’ take out that outside ACL.” Of wide receiver Kyle Williams, who has a history of concussions, Gregg Williams says “we need to find out in the first two series of the game…about his concussion.”

It’s unclear if Pamphilon intentionally timed his upload to damage Williams’s career prospects, but Williams stands before the NFL commissioner Thursday to appeal his ban from the league.