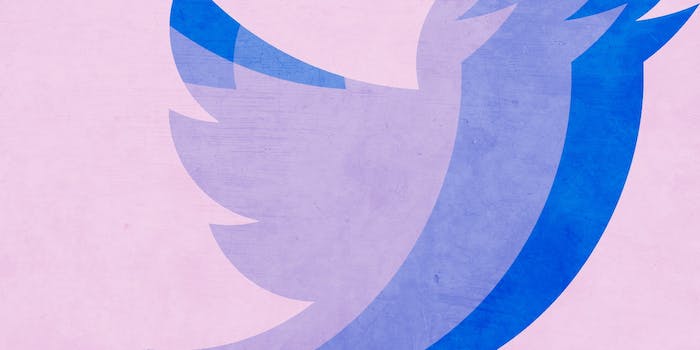 Sady Doyle is taking Twitter to task over user harassment

Doyle is RTing her trolls to bring attention to the problem.

Sady Doyle is no stranger to trolls. But even she has had her fill.

On Wednesday, Doyle received a very direct threat on Twitter from the account @MISOGYNY. The user, who later changed his name to @Hcreampie and made his tweets private, sent Doyle an image of a hand holding a gun, along with the text, “when i see you homeboy, oh my god..” 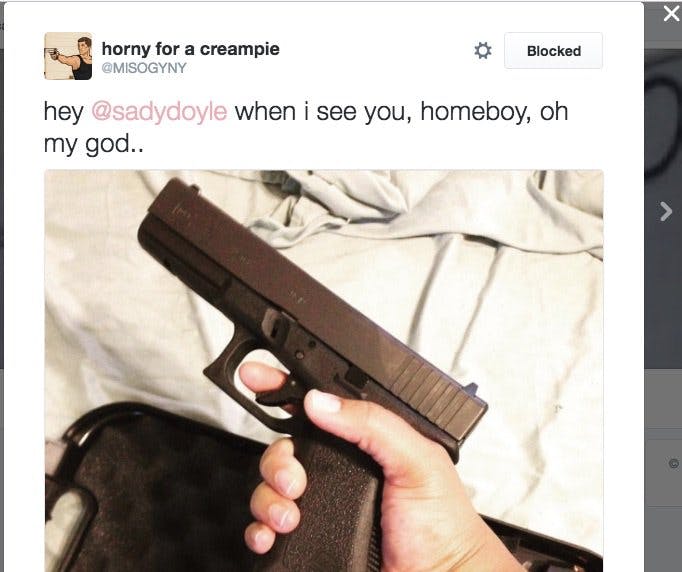 Doyle reported the image to Twitter who went on to tell her that they “could not determine a clear violation of the Twitter Rules.”

Although Twitter updated their rules in January to ban anti-gay and anti-trans harassment, and has recently cracked down on accounts used to back terrorism, when it comes to trolling, Doyle’s case demonstrates that Twitter still has a very real problem.

In spite of clear guidelines that declare such behavior unwelcome, those who report violent threats and hateful language are often left with unsatisfactory responses and little recourse.

Doyle decided to call attention to the issue by sharing her experience with her followers.

And here is @Support's reaction to the man (formerly @MISOGYNY, now @HCreampie) threatening to find and shoot me. pic.twitter.com/Fo1yqbr893

Doyle also explained her purpose in sharing the upsetting tweet and the subsequent harassment she’s received for sharing her frustration. 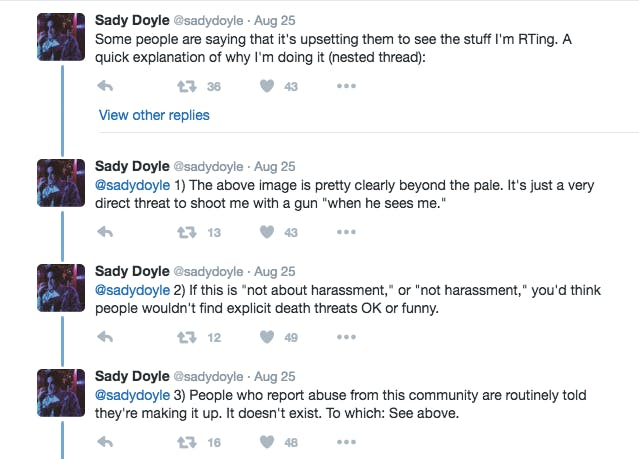 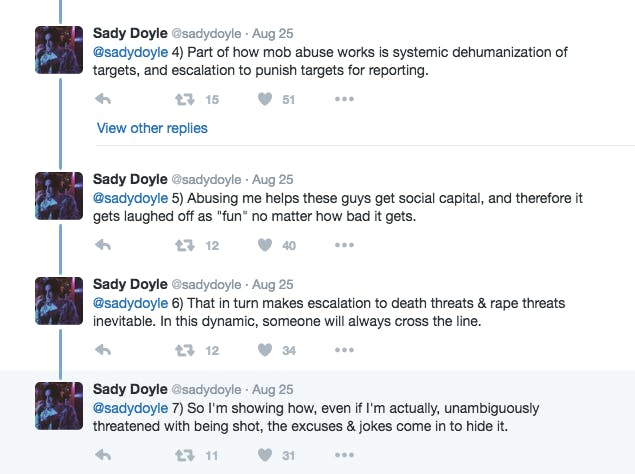 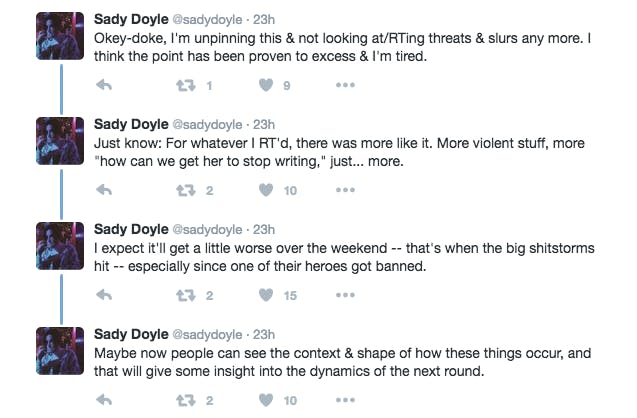 “What we’re seeing is a sort of crowd-sourced mob harassment as entertainment… Harassment makes [this behavior] fun and acceptable and a way to gain social capital,” Doyle said.

Twitter’s support channels seem willing to turn a blind eye to much of the behaviors it states are unwelcome in its rules, though it’s unclear why. As some of Doyle’s followers have pointed out, it’s almost as if the site is uncertain of its own rules.

Despite her frustrations with the outcome of her recent report, Doyle says she has no interest in leaving Twitter, although some of her trolls have suggested that as an option.

We are now discussing how to get me banned from Twitter as revenge for reporting harassment. Gentle reminder: pic.twitter.com/jITiuxBu9i

“I love Twitter. I’m on it every day,” said Doyle. “Overall, I think I get more good than bad. That’s why I’m still there. If it was pointless to use the site, I wouldn’t use it.”

Update, 1:01pm CT, Aug. 29: A Twitter employee speaking on background stated that the company doesn’t “comment on individual accounts for privacy and security reasons.” Instead, they pointed to a statement made by Kira O’Conner, Twitter’s EMEA head of trust and safety outreach, who spoke with Vogue UK about the company’s ongoing efforts to combat harassment:

“We’ll never be ‘done’ with safety. It’s a constant area of focus for us… We believe people should be able to express diverse opinions and beliefs on Twitter. But no one deserves to be subjected to targeted abuse online, and our rules prohibit inciting or engaging in the targeted abuse or harassment of others.”