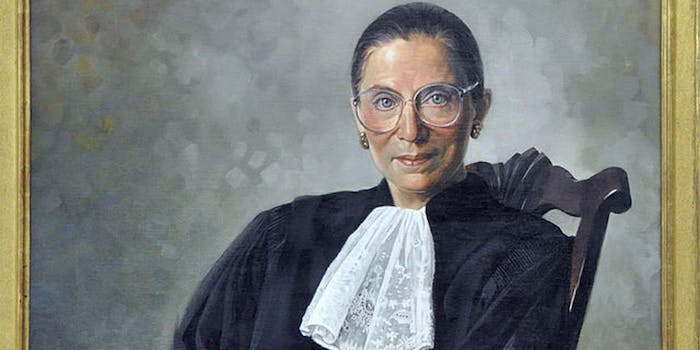 We finally got the Ruth Bader Ginsburg–Notorious B.I.G. mashup we deserve

Ruth Bader Ginsburg apparently has many, many talents.

Ginsburg drank enough wine at the State of the Union address in January to make people think she might have been a little tipsy, and her general badassery has inspired a mashup with the late Notorious B.I.G. on this Tumblr page that calls her the “Notorious R.B.G.”

All of this leads to the most basic question one might have about the second woman appointed to the Court: What would it sound like if Ginsburg rapped her own version of Biggie’s “Juicy?”

Well, it would sound a little something like this.

Even though her flow needs a little work, the verdict is in: Out of the nine Supreme Court justices, it’s clear who’s the coolest among the millennial crowd, who helps create the best memes, who makes the Supreme Court the most awesome court in the land. It’s RBG. (She narrowly beats out Justice Stephen Breyer.)

As for why that might be, Irin Carmon, the co-author of the book Notorious RBG: The Life and Times of Ruth Bader Ginsburg, told the Washington Post, “[It’s] just how ahead of her time her feminism was. The fact that it still really holds up and has a resonance for us. Young women are used to being underestimated. She has been underestimated her whole life, and yet she has reacted with strength, integrity and grace.”

Speaking of strength and grace, we imagine her to be a pretty great dancer as well.

With her many talents, it seems obvious what what Ginsburg should do when she from the Supreme Court: Start working a rap album, go on tour, and teach Drake a thing or two about how to be cool.