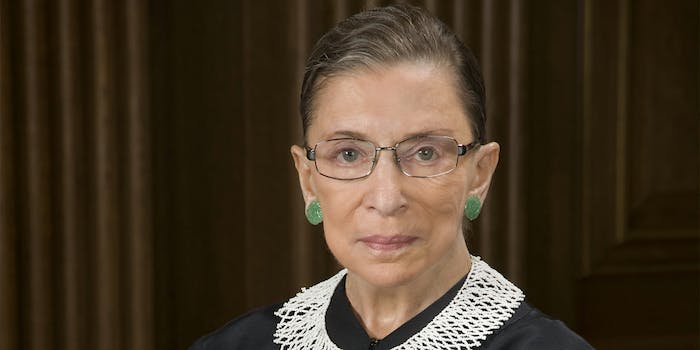 She seems healthier than you would expect for an 85-year-old woman recovering from broken ribs and surgery.

Four days after undergoing cancer surgery, Supreme Court Justice Ruther Bader Ginsburg has been released from the hospital, and the internet is celebrating her health.

Ginsburg on Friday underwent surgery at Memorial Sloan Kettering Cancer Center in New York City to remove two cancerous nodules from the lobes of her lung. Supporters of the justice freaked out on Twitter, offering emotional support through prayers and well wishes, and physical support through offers of lung donations.

The surgery went well. Ginsburg’s surgeon said the nodules she removed were malignant, and there were no other signs of disease in the justice’s body. She stayed in the hospital over the weekend and was released to continue her recovery at home on Christmas Day.

People on the internet are celebrating the good news, with some lauding it as a Christmas miracle.

For many, it is yet another reminder of how badass Ginsburg is. She even voted against President Donald Trump’s asylum ban from her hospital bed only a couple of days ago.

People also expressed anxiety over seeing her name trending and relief that the news was good.

Anyone else get super nervous whenever Ruth Bader Ginsburg is trending? #NotoriousRBG

Ginsburg is a strong liberal voice on the Supreme Court, and at the age of 85 many people worry that health issues may stop her from continuing to serve. She has stated that she has no intention of retiring any time soon, but her health scares in recent months have put progressives on edge. Ginsburg was hospitalized in November when she fell and broke three ribs but only stayed a few days before returning to work then as well.

If Ginsburg leaves the bench in the next two years it would give Trump the opportunity to appoint a third justice, but for now, she seems to be healthier than you would ever expect for an 85-year-old woman recovering from broken ribs and surgery.