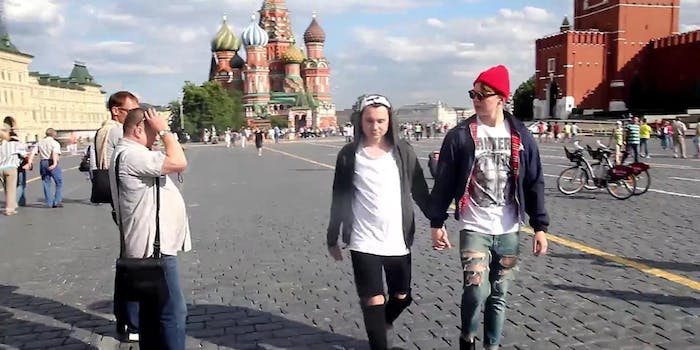 The men in this video are provoked and harassed—sometimes physically.

The answer ought not to surprise you. Polls show that Russian sentiment toward gay marriage has actually declined, not improved, over the past ten years. According to data from the Russian Public Opinion Research Center, not only do 80 percent of Russians oppose same-sex marriage today, but 41 percent of them are in favor of persecuting their gay fellow citizens in order to “exterminate the phenomenon” of homosexuality.

Russian YouTube prank artists ChebuRussiaTV—who take their name from the 1960s Soviet cartoon character Cheburashka—want to do something about this. The group isn’t known for hard-hitting political arguments; its members previously attempted to pick up women while using wheelchairs and mimed receiving oral sex on a park bench. But the pranksters’ latest stunt is loaded with sociopolitical commentary: two men hold hands and stroll through Moscow while a hidden camera films them from the front. The reactions they get are shocking.

While most passersby do absolutely nothing about it (if they even notice at all), those who decide to be bothered by the men’s public affection alternately provoke and harass them—sometimes physically.

How is one supposed to salvage an afternoon stroll with his beloved after something like that?

While many Americans celebrate marriage equality, they should remember that many other countries remain far less open-minded.