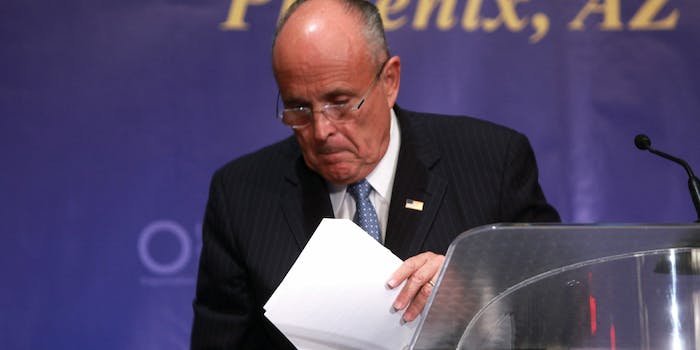 Rudy Giuliani was a mediocre mayor, a failed presidential primary candidate, and, for a split-second that lives on in internet infamy, a cringey drag queen. Now, he’s President Donald Trump’s lawyer, and he has some choice words for women who defend adult performer Stormy Daniels.

“Mr. Giuliani is an absolute pig for making those comments.”

Giuliani even suggested that, thanks to Daniels’ career as a sex worker, his incredible cross-examination skills will make it clear that she has no “credibility.”

“Explain to me how she can be damaged,” Giuliani said, CNN reports. “She has no reputation. If you’re going to sell your body for money, you just don’t have a reputation. I may be old-fashioned, I don’t know.”

Like many men, Giuliani seems to think that he’s an authority figure on what feminists should and shouldn’t do. But he’s not. Feminism is a movement led by women and other marginalized genders, and men like Giuliani have literally nothing useful nor productive to say regarding feminism’s “rules.” That’s just plain-old mansplaining with a sex-negative spin.

To be blunt, the mainstream adult entertainment industry does have problems. Sexual assault accusations have been levied against performers and crew members alike throughout the field for years, from on-set sexual abuse by directors to sexual abuse allegations against superstars like James Deen and Ron Jeremy. Even Daniels herself was once accused of enabling the problem. It’s rampant.

Everybody demanding Sam Bee plod through a public square self-flagellating for calling another woman a “cunt” should be demanding similar from Rudy Giuliani. Safe to assume moral inconsistency here MIGHT indicate that the Bee apoplexy wasn’t about fighting misogyny at all!

Nice of Rudy to tell us how to feel about women’s career choices.

As feminists, it’s our duty to support sex workers across every single industry—and that means clearly condemning comments like Guiliani’s, for starters.