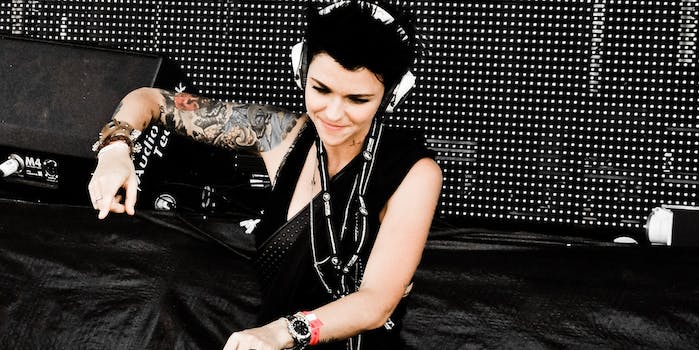 Ruby Rose is all for #FreetheNipple, but this NSFW shot took it too far

Her nipples are visible through her shirt and she did not consent for it to be published.

Australian model and Orange Is the New Black star Ruby Rose is not shy about her body. But there is one revealing photo that she’s asking her fans not to share: An image from a photo shoot where her nipples are visible.

Eight months ago, Rose was interviewed by the fashion and entertainment magazine Untitled. As she explained on her Instagram page yesterday, not only is the interview running far later than she anticipated, but it features a photograph in which she is wearing a see-through shirt where her nipples are visible.

The publication of the photo came to Rose’s attention when she was tagged on it by her fans on Instagram. Yesterday, she asked people to stop sharing the image due to the consent issue, and also requested they boycott this issue of Untitled. As she explained on Instagram:

“Imagine my shock to find that @theuntitledmagazine decided to publish images of me after we explained we wouldn’t be doing the shoot if I wasn’t appropriately covered. … The difference with working with a friend and or choosing to use nudity for art / and someone taking the piss and exploiting you is two different things.”

Rose also noted that she’s a supporter of “Free the Nipple,” a campaign to push for the decriminalization of toplessness and the normalization of breasts. Plenty of celebrities have used their platforms to spread the message—but those are all examples of consensual and informed displays of nudity.

Adding to Rose’s ire is the fact that the unauthorized photo appears in the magazine’s so-called #Girlpower issue. In addition to photospreads and interviews with female celebrities like Rose, Lizzy Caplan, and Sophie Turner, all of the journalists and photographers hired for the issue were women.

In a Twitter exchange with Rose yesterday, Untitled claimed to be unaware of any problem:

@RubyRose We believe in promoting female empowerment not exploitation. Any concerns with these photos was unfortunately not relayed to us.

“Hashtag absolute morons,” Rose replied. “I’m in shock at how cheap and petty this is. When a simple deletion and apology was all it should have been.”

If you were looking forward to seeing Rose’s photos in Untitled, never fear: She promises that there will be more opportunities to see new photos of her soon. “I have plenty of other shoots I’m proud of with professionals coming up,” she wrote.