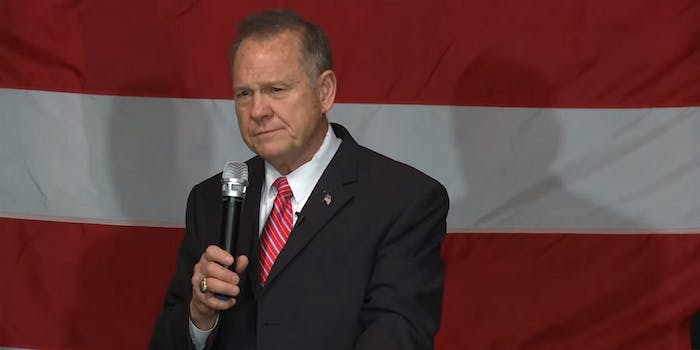 Moore thinks gay rights, not preying on minors, is one of America's evils.

Senate candidate Roy Moore (R-Ala.), who has been accused of sexually assaulting teenage girls, once implied America is an “evil” in the world because it promotes marriage equality.

Moore’s take on same-sex marriage came up after an interview with the Guardian from August resurfaced this week. While chatting with the publication, Moore argued the “focus of evil in the modern world,” which former President Ronald Reagan attributed to Russia in the ’80s, is actually America in the 21st century. And that’s when the former judge brought up gay marriage as one such “evil.”

“You could say that very well about America, couldn’t you?” Moore told the Guardian. “We promote a lot of bad things, y’know?”

Moore was then pressed about his statement, which mirrors Putin’s beliefs: Russia must resist the U.S. and maintain “traditional values and family values.” But instead of backing down, Moore sided with the Russian president.

“Well, then maybe Putin is right,” he said. “Maybe he’s more akin to me than I know.”

This isn’t a message Moore is keeping to himself, either. In a closed-door meeting for pastors against marriage equality, Moore preached that America is a Christian nation that has lost its moral core.

“Why do you think our children are growing up like they are?” Moore told pastors, according to the Guardian. “‘Cause we’ve lost the most important thing I wanna talk about in my political travels: morality.”

Moore’s take on LGBTQ rights isn’t that surprising when compared to his track record on the issue. The candidate previously claimed his alleged sexual misconduct is actually a “conspiracy” promoted by “liberals,” “socialists,” and the “lesbian, gay, bisexual, transgender” activists who disagree with the Republican party. He also believes transgender people “don’t have rights” in the U.S., which is a foreboding statement should he be elected to the Senate.