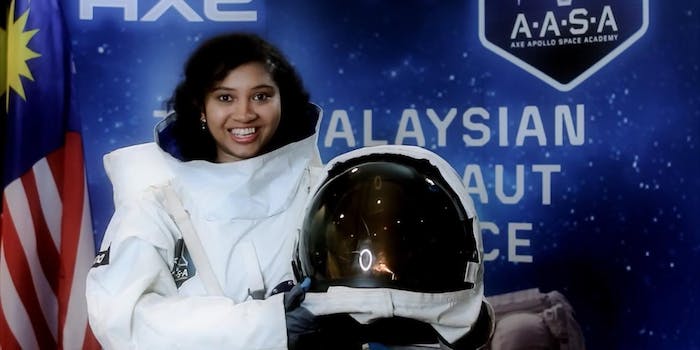 Can Tumblr help this Malaysian woman defeat sexism and go into space?

“[I]f your tampon burst while you are in space, the entire spacecraft will be spoilt.”

“[I]f your tampon burst while you are in space, the entire spacecraft will be spoilt.”

This is just one of the many sexist comments that Malaysian would-be astronaut Roshini Muniam Rose has had to put up with since she entered Axe Body Spray’s competition to send a Malaysian to its Florida space camp.

But if Tumblr has the final word on the subject, equality will win the day—and Rose will be heading straight to space.

The Malaysian Insider reported that Rose, who was the only woman to make the semi-finals, received a barrage of degrading remarks on her entry in the contest on Facebook. Rose, who is currently a post-graduate student in Kuala Lumpur, stated in her competition entry that she wanted to make Malaysia proud by being the first Malaysian woman to go into space.

“Being an astronaut is not just a man’s dream,” she said on YouTube. On her own Facebook page, she added that she’d overcome incredible hurdles to make it to the semi-finals and the public voting round:

I literally faced life-death challenges, from under-water tasks to building rockets & answering quizzes in the midst of the dramatic physical & mental marathon.

But despite Rose’s inspiring speech and hard work, the comments she received on Facebook were harsh. “There are many other competitions for females out there, lady,” one commenter reportedly opined. “[D]on’t ruin what’s intended or most considered to be men [sic] only chance?”

Initially, it seemed that many of the voters agreed. As of Thursday, Rose was over 20,000 votes behind the leading contestant.

But then a Tumblr miracle happened.

Last night, Tumblr user sisterofdusk decided to take Rose’s fight to the people. Posting to the Malaysian feminist Tumblr group keluargakilljoy, she asked, “I’ve cast my vote, what are you waiting for? Let’s send her to space!”

And Tumblr did. In less than 24 hours, Tumblr reblogged sisterofdusk’s post more than 38,000 times, pushing her from less than 3,000 votes to nearly 39,000.  An astonished Rose told her Facebook followers that it was like watching the stock market:

At 5am when I went to sleep it was 3K ++, now as I am typing this, it is reaching 10,000. My heartfelt thanks goes out to the thousands of people out there who have finally heard my call. THANK YOU THANK YOU a MILLION TIMES!!

Meanwhile, the comments of Rose’s YouTube entry and Facebook are currently swamped with supporters from Tumblr, assuring her that they’ll take her all the way.  “Tumblr’s got your back,” reads the current top comment from BGeeTea.

The power of Tumblr is now activated.﻿ Contestant is clearly in lead. Continuous voting every hour activated. Purpose: to fulfil one’s dream and torture all the sexist idiots. —4lw4y51nnoc3n7

Another side effect of the voting may happen to Rose, if YouTuber Alexa Morales is right. “You’re part of the Tumblr family now. <3,” she wrote.  Rose is active on Facebook, but doesn’t appear to be a part of the fandom and feminist-heavy microblogging platform that boosted her to the top—at least, not yet.

But even before Tumblr helped her along towards winning the competition, Rose was confident. On Facebook, while she was still in last place, she wrote:

Sticks and stones may break my bones, but words will never hurt me. I am all out to win this competition because I want to inspire ordinary people to have extraordinary dreams & goals.