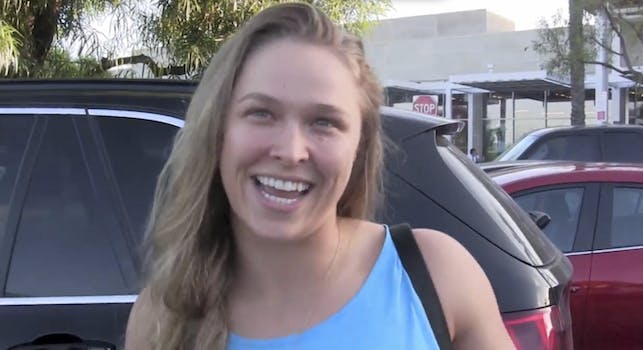 This proves that it never hurts to ask!

One lucky Marine is feeling Semper Fi-iiiine after ultimate fighting champ Ronda Rousey confirmed she would attend the Marine Corps Ball with him.

Rousey, who’s made headlines for dominating the female fighting circuit, showed a softer side when a TMZ camerman asked her if she’d consider attending the ball with Jarrod Haschert of the United States Marine Corp.

Haschert posted a video on Facebook last week admitting his feelings for Rousey and popping a big question. “You are my celebrity crush,” he said. “I love everything you do and I think that you are a phenomenal person. Which is why it would be my honor to take you to the Marine Corps Ball on December 11.”

He adds that he hopes it doesn’t interfere with her training and says “I hope you take this it into consideration.”

Clearly Rousey had been considering it. When the cameraman asked if she’d seen the video, she replied “I saw, like, screenshots of it before, and I was like I can’t go anyway because I’m in camp, but the fight got moved [from January to November] so I actually can go, but I don’t know hot to like, hit him up and say like, ‘Yeah, I want to go with you.”

The cameraman followed up, asking “Would you totally go?” To which Rousey replied “I would go, for sure.” And as if that wasn’t enough to make Haschert’s heart sing, the 28-year-old said she thought the Marine was “cute.”

Haschert might want to get a doctor to Camp Legune to check his pulse.

But, Rousey warned, he shouldn’t expect to score on the fighting champ, because she’s not a “first date kind of a girl.”

Haschert follows in the grand tradition of regular people asking celebrities to momentous events via the Internet. Sgt. Scott Moore scored a date with Mila Kunis to the 2012 Marine Corps Ball after asking her via a YouTube video. Back in 2013, one high school kid came shockingly close to having Kate Upton as his date. And last year, a Philadelphia high schooler asked Olympic snowboarder Shaun White to be her date. White didn’t reply, but instead surprised her at the prom.

These stories show that it never hurts to ask.