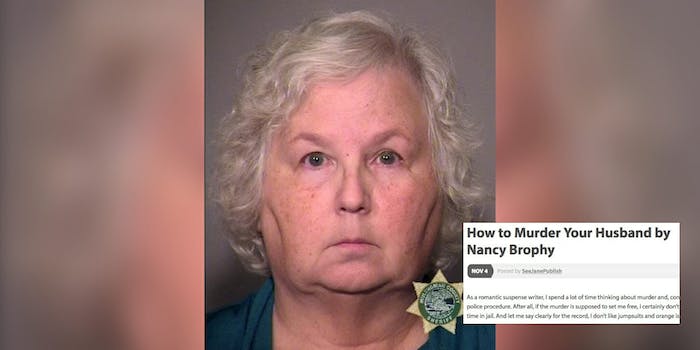 'The thing I know about murder is that every one of us have it in him/her when pushed far enough.'

Some people believe that if they announce their ideas to the world, they’ll become true. Others, such as an Oregon woman charged with murdering her husband, seems to have a knack for first writing them down.

68-year-old romance novelist Nancy Crampton-Brophy has been charged with the murder of her husband, Daniel Brophy, years after writing a blog of tips on the ways to murder a spouse. She was also charged with unlawful use of a weapon, the Washington Post reported. She was arrested on Sept. 5, months after Brophy’s death on June 2; he was fatally shot at the Oregon Culinary Institute, his workplace, and was found bleeding in the kitchen by students coming to class.

Crampton-Brophy, author of the novels The Wong Cop, and The Wrong Husband, wrote about women in marriages who thought about, or faked their own, death. She once blogged about “How to Murder Your Husband” for the blog “See Jane Publish” in November 2011.

“As a romantic suspense writer, I spend a lot of time thinking about murder and, consequently, about police procedure. After all, if the murder is supposed to set me free, I certainly don’t want to spend any time in jail. And let me say clearly for the record, I don’t like jumpsuits and orange isn’t my color,” the author wrote, introducing the post.

Busy day for me. blogging about how to murder your husband on See Jane Publish

In the post, which has since been taken down by the site’s administrators (but has been archived), Crampton-Brophy detailed the five motives for murder (financial, deception, faded feelings, abuse, professional) and various weapons and means for murder, including random heavy equipment and hiring a hit man (which she didn’t recommend, as hit men often rat their clients out).

She wrote that she wouldn’t actually want to kill someone and worry about the blood and brain splatters, nor keeping up with the lies she’d have to tell.

“But the thing I know about murder is that every one of us have it in him/her when pushed far enough,” Crampton-Brophy concluded.