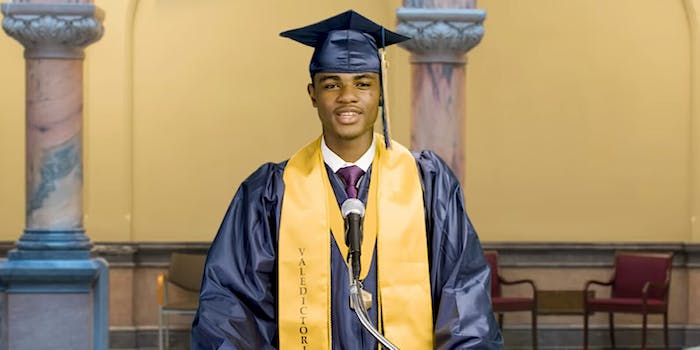 An upstate New York high school school refused to let its first ever African American valedictorian speak during graduation last month, so the city government allowed him to make his speech at city hall and posted it online.

Jaisaan Lovett graduated from University Preparatory Charter School for Young Men in Rochester, N.Y., last month, according to the Democrat & Chronicle newspaper. However, the school’s principle, Joseph Munno, did not allow him to make his valedictorian speech during his graduation.

In response, Rochester mayor Lovely Warren invited Lovett to make the speech at city hall and later posted it on YouTube.

“Jaisaan’s school did not allow him to give his valedictorian speech,” the mayor says in the video. “For some reason, his school, in a country where freedom of speech is a constitution right, and the city of Frederick Douglass, turned his moment of triumph into a time of sorrow and pain… Jaisaan will never graduate from high school again. He will never get that moment back. This is not the time to punish a child because you may not like what they say. We tell our children that if they work hard, if they study hard, that people will treat them with dignity, respect, and fairness.”

According to the Democrat & Chronicle, Lovett believes he was not allowed to speak because of the principal’s “personal animosity” toward him.

Lovett, whose speech acknowledges many people he says helped him in his high school career, speaks directly to the principal who denied him his speech during the video posted on YouTube.

“To Mr. Munno, my principal, there’s a whole lot of things I’ve wanted to say to you for a long time, as a matter of fact, I wasn’t going to give this speech at all. But then I realized something–I realized that this speech is about more than just me, it means a lot to everybody that I mean a lot to,” he said. “I’m here as the UPrep 2018 valedictorian to tell you that you couldn’t break me. I’m still here, and I’m still here strong. And after all these years, all this anger I’ve had toward you and UPrep as a whole, I realized I had to let that go in order to better myself. And I forgive you for everything I held against you.”

In a statement posted on Facebook, the University Preparatory Charter School for Young Men said it’s board of trustees was “aware” of Lovett not making his speech and said it would be “reviewing the circumstances regarding what happened.”

You can read all of the Democrat & Chronicle‘s report here.