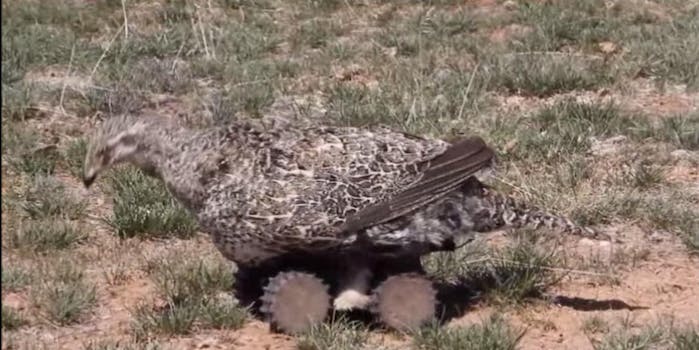 They actually have a very important academic function.

Grouse, apparently, are no more immune to the allure of a sexy robot than is Domhnall Gleeson. Gail Patricelli and her fellow biologists from the University of California, Davis, have damned God’s natural law by cobbling together a pair of lady robot greater sage grouse to get the gentlemen of Wyoming all fired up.

Like the Terminator, a robotic undercarriage covered with human skin, the robogrouse, named Salt and Pepa, are a horror movie come to life—skinned lady grouse are taxidermied and wrapped around a tiny sex dinosaur made of adamantium and transistor radio parts.

Then they are sent out into the “lek,” the flat performance and mating area where breeding females and would-be mating males meet.

The thing you have to understand about sage grouse is that the males’ mating display makes the Thunder From Down Under look like mimes. They fill their rubbery chest air sacs, flap their wings, and make a weird popping sound, all while dancing about nonstop.

Salt and Pepa, outfitted with cameras and with the capacity to move about and rock, robowiggle their way into a crowd of hump-ready males and it’s all wow-wicka-wow-wow.

One of the problems with lek-style mating is that only a handful of dominant males get to mate, and they mate with all the ladies. This results in inbreeding that can make the population more susceptible to disease and environmental pressure. To understand how dominant males become dominant can help preserve species.

Megan Gannon of LiveScience described one of the most dominant of males, Dick (UC Davis clearly contracts with hack comics for their naming needs). Last year, Dick humped ladies to the tune of 30 times in one morning, 23 of those times in 23 minutes.

Don’t get too jealous fellas. The way grouse mate proves that nature is gross. Does the phrase “cloacal kiss” mean anything to you? No? Good. Don’t look it up.

Salt and Pepa’s raison d’etre is to help these perverted Farnsworths to understand up close and personal what social actions, as opposed to physical attributes (which can be assessed via the sensitive microphones and cameras the academics already have), give a male his mating game.

But I think we all know this is going to result in a new generation of barf-inducing sex robots. And you know what happens then don’t you?