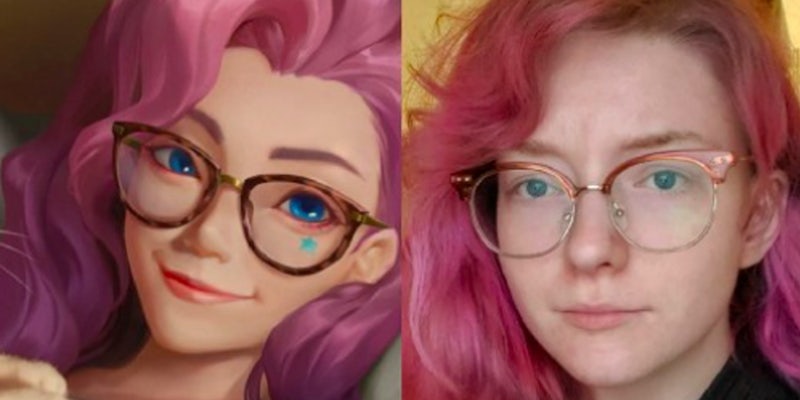 'I’m uncomfortable with the similarities and I believe she might have been based on me.'

The video game developer recently unveiled a new skin for one of its games, League of Legends, and a woman from California is claiming the skin was modeled after her without her permission. She is now planning to take legal action.

Stephanie, @Step_nie on Twitter, posted a Twitter thread to accompany her Medium blog post, in which she goes into detail about why she thinks the skin, “Seraphine,” was based on her. A skin in League of Legends can be described as “cosmetics (or textures) players can wear in-game and show off to other players when they choose a character,” the Daily Dot’s Ana Valens explains.

In her blog post, Stephanie said that she had a brief relationship with a Riot Games employee, whom she calls “John,” in 2019. During the three-month-long relationship, they frequently played League of Legends together, and he even joked about “making content based off (her).” The relationship ended after she expressed that she felt he was “moving too fast,” leading him to ultimately block her.

About a year later, when the new skin for Seraphine was announced, Stephanie said that she was taken aback by how similar the skin’s features are to hers.

“I looked into her Twitter account more, and found Seraphine’s art, sketches, and journals,” she wrote. “I’m a hobby illustrator and artist, and I remembered I had actually sent John some art. My art is strikingly similar to art that Seraphine ‘makes’ of herself and is posted to her social media. Like, really similar.”

Stephanie said that she shared an essay she wrote for school about Piltover and Zaun, places in League of Legends, with John and that he, in turn, shared her work with his colleagues at Riot Games. Seraphine is from both Piltover and Zaun.

Stephanie also claimed that the poses Seraphine does in photos with her cat are “eerily” similar to the poses she does with her cat. “The more I looked at her page, the worse it got,” she wrote of Seraphine’s Twitter account.

While she said that John is not a character or skin designer, he reportedly told her that he has the potential to influence the design team.

“A lot of details about Seraphine line up very closely with facts about myself: her name, her drawings, her cat, a lot of her pictures, her hair color, her eye color, her face shape, and even where she’s from,” she wrote.

Stephanie said that even though League of Legends is her favorite video game, she can’t get herself to play it anymore.

“I’ve felt really grossed-out about it, to the point that I can’t play one of my favorite videogames. Besides that, it’s been kind of horrid to have a League champion who looks like you, has so many of your characteristics, and has a NAME that’s almost identical to yours,” she wrote.

The allegation follows Kotaku’s investigative article about the sexist work environment that has allegedly been fostered at Riot Games. The article outlines many instances in which male employees made inappropriate remarks toward female employees.

“[Lacy] said her direct manager would ask her if it was hard working at Riot being so cute,” Kotaku’s Cecilia D’Anastasio penned in the piece. “Sometimes, she said, he’d imply that her position was a direct result of her appearance. Every few months, she said, a male boss of hers would comment in public meetings about how her kids and husband must really miss her while she was at work.”

The anonymous source, who is referred to as Lacy, also said that she conducted an experiment of sorts to prove she was being undervalued because of her sex. She expressed an idea at a meeting, which was shot down. She then asked a male colleague to pitch the same exact idea to the same team, and it was lauded.

“The whole room was like, Oh my gosh, this is amazing.’ [His] face turned beet red and he had tears in his eyes,” Lacy told D’Anastasio. “They just didn’t respect women.”

The Daily Dot has reached out to both Stephanie and Riot Games.