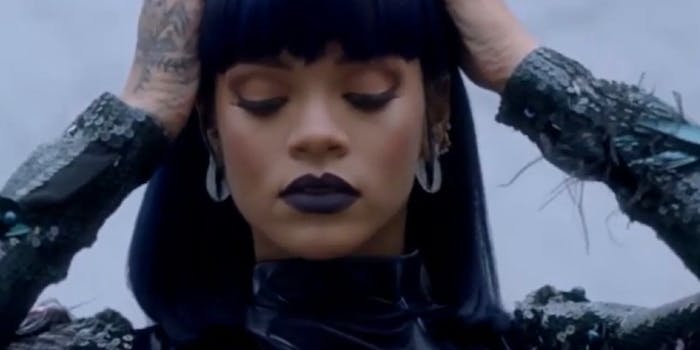 Fans on social media are resisting a thin eyebrow revival.

As a society, we’ve done a pretty good job of deciding which ’90s trends we’re going to revive and which ones are better left behind. Things like chokers, mini skirts, and the Backstreet Boys have all made a fairly acceptable resurgence in the last few years. Luckily, skinny ties and JNCO jeans remain in the past (so far).

Now we must ask ourselves: Are we willing to accept the comeback of the pencil-thin eyebrow?

On most occasions, we’d say, “Absolutely not.” But does it change anyone’s mind if Rihanna is sporting thin eyebrows on the September cover of British Vogue?

Rihanna scored the September Issue of British Vogue and its a high fashion dream come true.

Despite Rihanna being the supreme ruler of all things beautiful and good, fans on social media are openly resisting a thin eyebrow revival. One user quips: “I truly believe a return of thin eyebrows to popular fashion is a sign the planet would be better off incinerated.”

First they brought back sleeves with ruffles, and I did not speak out…

Then they brought back shirts with the shoulders cut out, and I did not speak out…

Then they brought back razor thin eyebrows, and I said, NOOOOOOOOOOO!!!! pic.twitter.com/HK9Armf4eM

Honestly thin eyebrows seems like the most decadent court-of-Louis-XIV shit to me. I will face Rihanna and walk backwards into hell

Some may find these condemnations of thin eyebrows to be dramatic, but lest we forget…

Everyday I thank god that 90s eyebrows are a thing of the past pic.twitter.com/4N0bPLYkJV

But then again, if Rihanna thinks thin eyebrows are coming back, well, they’re probably coming back.