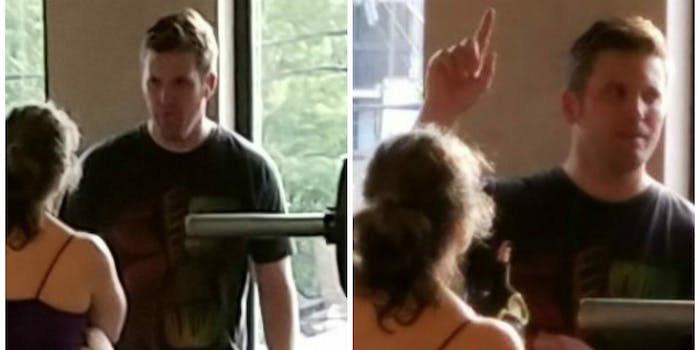 Alt-right leader Richard Spencer just got banned from his gym

Prominent white nationalist Richard Spencer is currently in the market for a new gym. According to various reports on Saturday, the 39-year-old got kicked out of his regular gym and banned after being confronted by Georgetown University professor Christine Fair, who recognized Spencer as one of the chief figureheads of the so-called alt-right.

According to Fair, who recounted the experience in a Tumblr post, she spotted Spencer working out at an Alexandria, Virginia gym, and she used “the full range of my first amendment entitlements” to let him know what she thought of him. According to Fair, Spencer ultimately summoned an employee of the gym for help―a black female trainer, which is notable since Spencer has previously insisted that “America belongs to white men.”

“Seriously? This superior race of a white man needed the help of a female African American?” Fair wrote, mocking Spencer’s response. “What kind of martial race member is he?” Fair also wrote that Spencer denied his own identity when she called him out, claiming he wasn’t who she thought he was.

For his part, Spencer―who recently led a torch-wielding throng of white people to protest the removal of a Confederate monument in Charlottesville and who once closed out a white nationalist event with a chant of “Hail Trump, hail our victory, hail our people!”―insists he was “a model gym-goer.”

It’s not hard to see why Spencer would want to hit the gym and add a little muscle. In January, Spencer was sucker-punched during an on-camera interview, a moment which immediately became a thriving meme and one which the alt-right leader worried would hurt his image.

In any case, Spencer confirmed to BuzzFeed that he’s no longer welcome at the gym. Said Spencer: “I don’t bother anyone. I don’t talk to anyone. I really just go and lift weights … I don’t come to the gym to do politics. But she started screeching and yelling all this stuff … I can’t believe she’s a professor. She’s an imbecile.”

In any case, let this serve as an official warning: If you live in Virginia, you might want to keep an eye out at the gym for any Richard Spencer-looking new members.