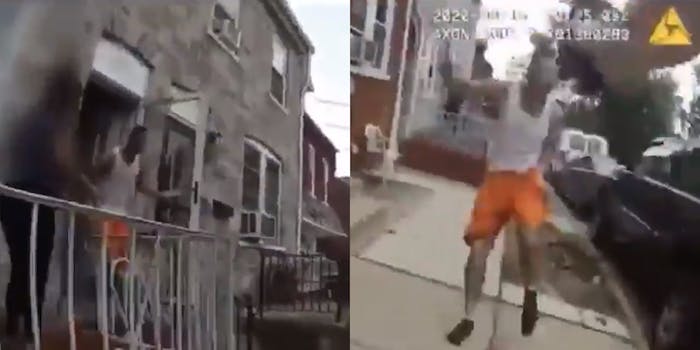 On Sunday at approximately 4:15pm, police responded to a domestic disturbance report on the 300-block of Laurel Street in Lancaster, Pennsylvania. From police bodycam footage, an officer can be seen approaching the home, where he is met by an unnamed woman. He then asks the woman “Where’d he go,” likely in regards to the suspect. Shortly after, the suspect runs out of the house, charging toward the officer, with a knife in his hand. The officer then shoots at him several times until he hits the ground.

The subject has since been identified as 27-year-old Ricardo Munoz. He was pronounced dead at the scene of the incident, causing more than 100 protesters to gather in Lancaster last night. Protesters built barricades out of trash cans and street signs to block off police who launched tear gas into the crowds. In response to the community’s uproar, the Lancaster DA asked protesters to “remain peaceful as violence and destruction of property will become headlines and serve no purpose for the safety and wellbeing of our citizens and neighborhoods.”

The public outcry comes just one day after video footage of a Georgia cop beating a Black Lyft passenger circulated online and one month after the shooting of Jacob Blake. Several demonstrations against police brutality have unfolded around the nation after numerous cases of police shootings during the pandemic. From the streets of Los Angeles to the U.S. Open, collective activism has resulted in heightened attention to unnecessary force by cops.

The officer involved in the shooting has been placed on leave and the Lancaster County District Attorney’s Office is investigating the situation.