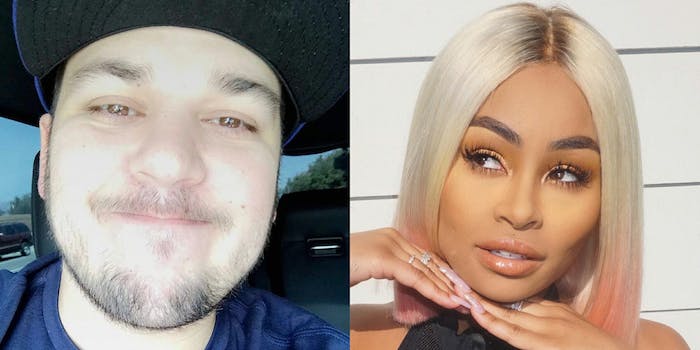 America has a deep, unfortunate history of ignoring female victims of shame and abuse.

America’s most inescapable reality show dynasty knows how to make headlines, but unfortunately for Rob Kardashian, potentially committing a sex crime is the wrong kind.

The 30-year-old sock designer and brother to Kim, Kourtney, Khloe, Kendall, and Kylie was temporarily banned from Instagram on Wednesday after he began sharing sexually explicit photos of Blac Chyna, his ex-fiancé. In a series of posts, which he then took to Twitter, he accused Chyna of being unfaithful. “But she couldn’t remain loyal and cheated and f**ked way too many people and she got caught and now this is all happening and it’s sad,” Kardashian said of the model and entrepreneur.

That could be because internet law is still not-well-treaded territory, but it could also be because, like most hard-to-prosecute crimes, the victims are women.

Imagine how it must have felt for Leah Juliett, a 14-year-old student who had private photos of her distributed to every guy in her high school. Her male classmates might not have known her name, but they knew what she looked like naked. There’s also Nikki Rettelle, whose ex-boyfriend planted hidden cameras in her home to record her every move. Rettelle told CNN that the man, who she mockingly calls “Mr. Wonderful,” sold the footage to websites like IsAnyoneUp and UGotPosted. The latter was run by Kevin Bollaert, who received an 18-month prison sentence in 2015. He also operated a site where you could pay $350 to remove the same photos he posted.

The laws that protect these women vary by state, and they often aren’t enough. What constitutes consent in one locality could be very different from another.

One major issue is the conundrum of having “evidence” that will satisfy potential prejudices of a judge and jury. TMZ speculated that should Blac Chyna decide to pursue her case, it could be a challenge: She “liked” Kardashian’s post prior to its removal. That may assist a defense team in proving that the 29-year-old wasn’t harmed by the content being shared—never mind that he it seems clear, by his messaging, that he did so without her consent.

Then there are the nearly dozen states that lack any laws on the books criminalizing revenge porn. These include Kentucky, Mississippi, Ohio, and Wyoming, in which Blac Chyna would have no legal recourse for seeking retribution at all. Jeff Metzmeier, who works as an attorney in Louisville, Kentucky, told the city’s Courier Journal that he sees a “dozen” cases every year where the victims simply have no options. Metzmeier said that many are domestic violence survivors who have recently left their abusers; their exes use the threat of sending private photos to shame them into remaining in a toxic, violent relationship.

While Congress debates the issue, certain states have stepped up their fight against sex crime in digital spaces. California, where Chyna calls home, launched a dedicated eCrime unit in 2011.

If Chyna decides to press charges, she will have the ability to have her day in court. But we must fight for a world where all victims have the same opportunity.