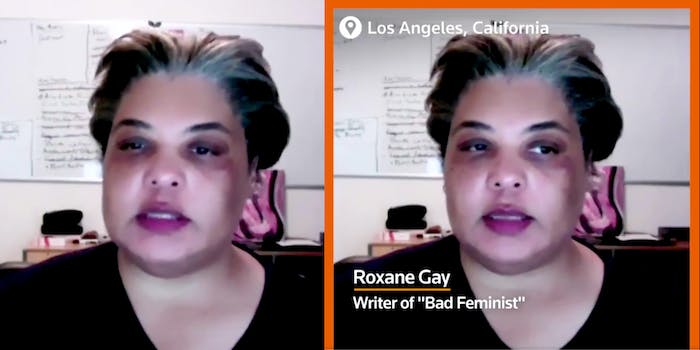 Reuters has denied the claim.

Roxane Gay did a video interview about women’s suffrage for Reuters to commemorate National Women’s Equality Day on Aug. 26.

Gay appears to be wearing makeup, including smokey eyeshadow and magenta lipstick, in the video. The Bad Feminist author, however, claims she did not apply the makeup IRL herself but that it was digitally applied—without her knowledge—by Reuters.

“Did this short interview yesterday about women’s suffrage. I wasn’t wearing make up so I am FASCINATED by how they photoshopped (??) some on,” she wrote, quote-tweeting Reuters’ video.

A Reuters spokesperson pointed the Daily Dot to its Twitter statement on the matter.

“No filter or other coloration was applied to the Reuters video interview with Roxane Gay, as this is strictly against our policy. The color quality of the video is due to shadows from poor lighting as well as low resolution,” the statement reads.

In the video, Gay discusses how the women’s suffrage movement, or the fight for women’s right to vote, left out Black women in particular. She notes that white suffragettes were only “deeply concerned with white middle class and wealthy women,” leaving behind “working-class women, women of color, and Black women specifically.”

Following Gay’s callout, users on Twitter, where the video was posted by Reuters, began urging the outlet to remove the video and post the untouched original.

“Please do Dr. Gay the courtesy of taking this altered video down and reposting the original,” Twitter user @stephenablack wrote. “It’s beyond misogynistic to apply a makeup filter to her face. The message you’re sending is that women and femme people can only be heards if they are pleasing to the eye. Stop it.”

Many also pointed out the irony of altering a woman’s appearance while she discusses women’s equality and noted that the alleged alterations are taking attention away from an important topic. “Recognize how this is illustrative of the point she is making, respond to this, and post the original video without a filter,” another user wrote.