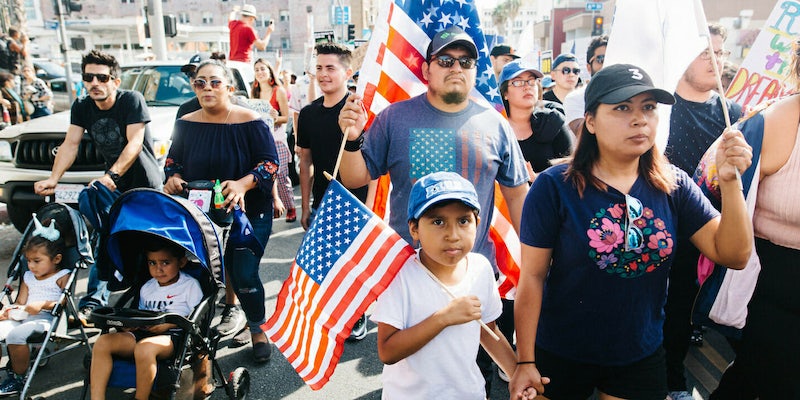 DACA recipients are being urged to renew their status ASAP

The internet is helping raise funds for DACA renewal fees in light of upcoming injunction.

An Aug. 8 preliminary injunction hearing on the “lawfulness” of the Deferred Action for Childhood Arrivals (DACA) program has advocates urging current and former DACA recipients to renew their status immediately if it expires before 2020.

Cesar Espinosa, the executive director of immigrant advocacy group FIEL, told Houston news station CW39 that anyone with less than a year left on their DACA permit is encouraged to begin the renewal process right now.

Across Twitter, immigration lawyers and advocates are calling for people whose DACA expires in the next year to get their documentation renewed while they still can.

FYI: USCIS accepts renewals outside of the recommended 150 days. If you're currently protected but waiting to renew, RENEW NOW! For #DACA renewal scholarships, check out https://t.co/fXTGHjVsaL pic.twitter.com/5drlDnL7Wh

DACA Updates
1. If your DACA expires in 2019, renew NOW!
2. There's pending DACA lawsuit follow ups, especially the one on August 8, 2018 that can change or end renewals.

If you need to renew your… https://t.co/BzNfTFTrdT

On Aug. 8, U.S. District Judge Andrew S. Hanen is scheduled to preside over the preliminary hearing of Texas v. Nielsen, which was brought by Texas and other states last year to challenge the legality of DACA. According to the National Immigration Law Center, Hanen will decide whether to issue a preliminary injunction on DACA, which may halt U.S. Citizenship and Immigration Services (USCIS) in accepting DACA applications and renewals. (In 2015, Hanen issued the ruling that stopped President Barack Obama‘s Deferred Action for Parents of Americans [DAPA] program, which, similar to DACA, would have allowed certain undocumented parents of American citizens to work in the U.S. legally.)

Last year, the Trump administration announced that the DACA program would be discontinued. However, several federal judge injunctions have allowed for current and previous DACA recipients to apply for renewals while lawsuits against the administration played out. In April, another judge gave the Trump administration 90 days to explain its reasoning for canceling DACA, requiring that the program be opened back up to first-time applicants if the government couldn’t justify the cancelation. But the judge extended the government’s deadline indefinitely, meaning that people who have never had DACA still aren’t eligible to apply.

Though the federal government has asked the district court to delay possible Aug. 8 injunctions by two weeks in order to give them time to file stay applications with all other courts involved in DACA litigation, there is no guarantee that Hanen will do that. So, DACA recipients may have another two weeks to renew their applications, but can’t assume this will be the case.

While USCIS usually encourages people to renew their two-year DACA status 120 to 150 days before their documentation expires, they do take applications from people outside of that timeframe.

And for that, people invested in the future of DACA recipients are urging them to gather the necessary documents, pay the $495 application fee, and pay to expedite the shipping of their application so that it arrives at USCIS in less than five days, before an injunction can be issued. If you renew your application and the injunction is filed, you’d still have another two years as a DACA recipient and would be able to work legally without threat of deportation.

Important #RenewDACA update from @duh_nee_ella & @mariapraeli: USCIS is accepting renewals beyond 150 days. Renew your DACA if yours expires before 2020. Go to https://t.co/AIjBo5qj9S to learn more. pic.twitter.com/x3mxzMTdRQ

Important DACA update:
– Renew your DACA status NOW, if it expires before 2020.
– Why?
– Because, DACA renewals could be stopped after an Aug 8th hearing in fed. court in TX. The ruling could stop all renewals nationwide.
-USCIS is accepting renewals beyond the 150 day window https://t.co/p2uOF3pWzG

Twitter users are also asking for people to donate to DACA renewal funds, both on an organized and individual level. On such short notice, $495 is not be disposable income for many—add to that, expedited shipping costs.

My goal today is to raise $3,000 to cover SIX #DACA rental fees for 6 Dreamers from across the country.

Dear @Twitter and #NN18, please help with RTs or donations!

If y’all have any cash to spare, there are around nine local organizers in the Salt Lake City area who need to come up with $500 each in the next few days in order to renew their DACA status. PLEASE consider donating to them directly — PayPal [email protected]

Heeey y’all! So I have to renew my DACA soon which is $495, if any of y’all wanna help me with any amount my Venmo is @ FabyFigueroa please and thank you!! Also, RT!! #DACA #AlliesWhereYaAt

Despite how difficult this may feel for applicants who either recently renewed their DACA status, or don’t have the funds to reapply so soon, there are resources available for people who may need them. California’s Department of Social Services has compiled a list of qualified non-profits that provide free DACA legal application and USCIS filing assistance. Some of these organizations may also provide assistance with renewal filing fees.

And if you’re still in a pinch, Twitter user Kenia Ceron has created a straight-forward how-to guide for creating your own DACA renewal fundraiser. Ceron’s guidelines show that fundraisers should include fundraising processing fees, shipping, and potential legal costs in their goals, and should engage donors by sharing their story and posting their fundraiser on social media with updates on funds raised.

Ceron told the Daily Dot that when the DACA renewal process had a possibility of closing in January, she started a fundraiser for herself and her siblings. In 10 minutes, all three siblings had met their fundraising goals ($1,500 total), so she kept the fundraiser open. In less than a day, Ceron helped raise enough money to help another nine DACA recipients in Des Moines, Iowa.

“Through the process of fundraising for fees, I’ve learned a few things that have proven to be successful and such information must be shared with everyone,” Ceron said.

The National Immigration Law Center did not immediately respond to the Daily Dot’s request for comment.