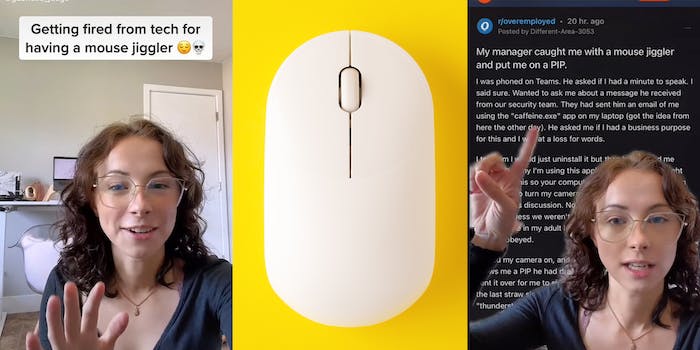 'This is why you need a manual mouse jiggler!'

A TikToker read a post on the r/overemployed subreddit from a remote worker who said they were going to be fired for downloading a “mouse jiggler” app.

In the video posted by Gabrielle Judge (@gabrielle_judge) on Friday, the TikToker reads a post that says the original poster downloaded “caffeine.exe,” an app that periodically jiggles the mouse on the screen to make it seem like remote workers are online even if they’ve stepped away from the computer.

According to the post, the worker was asked to “sign a PIP,” or performance improvement plan, after their company’s security team notified their manager that they were using a mouse jiggler app.

“He asked me if I had a business purpose for this and I was at a loss for words. I told him I would just uninstall it, but then he pressed me again as to why I’m using this application and then straight up said, ‘Is this so your computer doesn’t fall asleep?'” the post reads. “Apparently, the mouse jiggler was the last straw since I had been missing standups and having ‘thunderstorms’ and ‘power outages’ since I started.”

@gabrielle_judge What do yall think? Is his employer over bearing or did he mess up? #techlayoffs #overemployed #programming ♬ Oblivion – Grimes

The video has garnered over 621,000 views as of Monday, with commenters debating whether or not the worker should be disciplined for having the mouse jiggler downloaded.

“I work for a tech company and it’s usually veryyyyy taboo to download anything on ur work computer not sanctioned by the company… huge potential for data breaches,” one user argued.

“Don’t download stuff on your work machine. They know. They always know. It’s their discretion that determines if you get caught,” another wrote.

“It’s complicated, but if I had an employee with performance issues and then I found out they were making it look like they’re at their computer when they’re not, I would absolutely fire them,” a third added. “That said, many companies obsess over appearing online when it’s not relevant.”

Other users suggested manual mouse jigglers for remote workers who don’t want to risk getting caught downloading software onto their work computers.

“THIS IS WHY YOU NEED A MANUAL MOUSE JIGGLER! look up the liberty mouse mover on amazon, best money i’ve ever spent,” one commenter suggested.

“That’s why I have a MANUAL mouse jiggler. It plugs into a wall outlet and physically moves my mouse. Not tied to my work computer at all!” another wrote.

The Daily Dot reached out to Judge via email.