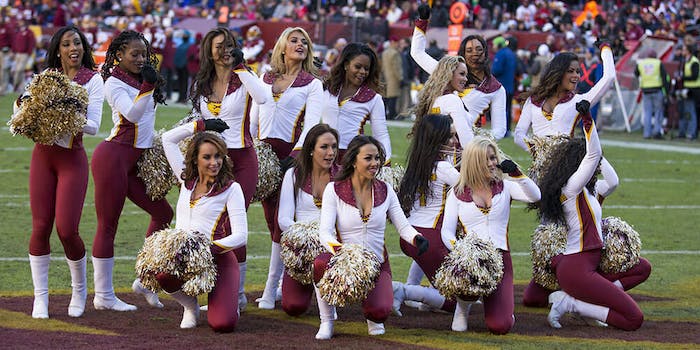 Redskins cheerleaders say they were ‘pimped out’ on Costa Rica trip

Descriptions of the trip shocked people on social media.

Washington Redskins cheerleaders were deprived of their passports, subjected to a topless photoshoot, and coerced into acting as “personal escorts” on a 2013 trip to Costa Rica, the New York Times reported Wednesday. The Times investigation into the trip provoked sympathy and outrage—as well as dismissive sexism—on social media.

According to the Times, cheerleaders—whose names were kept anonymous due to nondisclosure agreements—described a trip to Occidental Grand Papagayo resort on Culebra Bay. They said after arriving, team officials collected the women’s passports, had them pose topless for a photo shoot where men were “invited spectators,” and later sent them off with male sponsors to be “personal escorts at a nightclub.”

While they were not forced into sex, the cheerleaders told the newspaper they felt the team was “pimping us out.”

“They weren’t putting a gun to our heads, but it was mandatory for us to go,” one of the cheerleaders said. “We weren’t asked, we were told. Other girls were devastated because we knew exactly what she was doing.”

“It’s just not right to send cheerleaders out with strange men when some of the girls clearly don’t want to go,” another cheerleader added.

In a statement, the Redskins said cheerleaders are “contractually protected to ensure a safe and constructive environment.” Stephanie Jojokian, director and choreographer for the Redskins cheerleaders, said she was “not forcing anyone” to participate.

“I’m the mama bear, and I really look out for everybody, not just the cheerleaders,” she told the Times. “It’s a big family. We respect each other and our craft. It’s such a supportive environment for these ladies.”

On Twitter, people were shocked by descriptions of the trip and said team officials taking up passports resembled human trafficking.

This is human trafficking by the Washington Redskins. https://t.co/MvRC8QthqJ

Others disagreed. Britt McHenry, a Fox News and Federalist contributor, tweeted that the blame lies with the cheerleaders.

“These women dance in glorified bras and underwear on a field for male entertainment,” she wrote. “If you don’t want to be treated like a ‘sex object,’ perhaps don’t be one for $.”

One complaint, “in which they were often dangled as sex objects for the titillation of male fans away from games.” How is that why different than ON the field? If their safety was truly at risk, however, then that’s an issue.

Others similarly conflated choosing to be a cheerleader with choosing to be subjected to topless photo shoots or entertaining male sponsors, neither of which was outlined in contracts, according to the Times.

Look — I'm sorry but if you sign up to be a cheerleader and then agree to do a topless photo shoot then you really don't get to complain. I know that's not "PC" or MeToo of me, but good lord.

Look, i am a big proponent of personal accountability. They knew and chose to do it. Ny times cut out the sensationalism. Ladies. Promotional events and interacting with sponsors and season ticket holders come with the territory.

In March, a former New Orleans Saints cheerleader filed a complaint alleging gender discrimination after she was fired in January over an Instagram photo. She says the team enforced double standards and sexist rules on women.