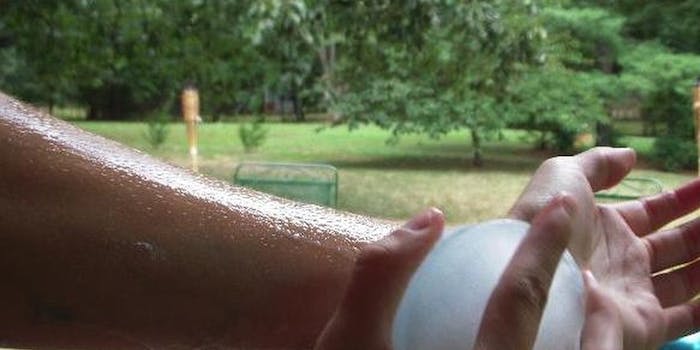 A weird kind of clean

Redditors invent a new way to shower, involving a block of ice and soap. Really.

Taking a shower is so old fashioned.

On Sunday, a reddit post featuring details of a new, peculiar, bathing procedure reached the front page. It first involves freezing a mixture of body wash and water. The frozen block is then stored in a cooler so after exercising athletes can use it to rub themselves clean.

The post was a huge hit with redditors who let their imaginations run wild with the idea of seeing someone use a frozen block of soap and water to bathe. Here’s the top thread:

The reddit post collected more than 1,300 comments and almost an equal amount of upvote and downvotes. (Upvotes allow reddit users to express agreement, interest, or approval. Downvotes express the opposite) Despite this clear divide, the post spawned at least eight different posts addressing the frozen bar, many of which were memes.

The Daily Dot has reached out to the redditor who posted the image and is waiting to hear back.

“I don’t always shower,” said one meme using the most interesting man in the world. “But when I do it’s not with a fucking block of ice.”

“I asked him if he wanted to take a shower with me,” said another, using the so-called “internet husband” meme. “He told me to just use a soap block from the freezer.”

“No shower nearby. Better freeze my own piss,” said a version of Bear Grylls’s “better drink my own piss” meme.

Most redditors, like probablyhittingonyou, were not convinced that this new form of bathing would actually work.

“I don’t really think the rinse part of this would work. The shower water is supposed to wash the lather off of you… but here, wouldn’t it simply stick to the ice?” wrote probablyhittingonyou. “You’d really just be smearing your filth all over yourself.”

Redditor tinkercreek was more direct with his opinion.

“Or you know you could just take a fucking shower,” tinkercreek wrote.