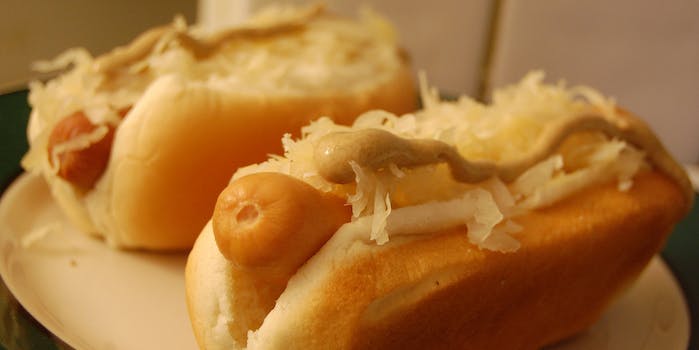 In what will surely go down in history as one of the most fascinating Reddit AMAs of all time, a man called DoubleDickDude is dishing the dirt on what it’s like to walk around with two penises. And before you hit the comment section to cry “FAKE!!!1!,” you should know that there’s photographic proof, the likes of which may constitute the very definition of NSFW.

Firstly, the matter of “how the hell does that happen”: the condition, known as diphallia, is not congenital but the result of a stress or malfunction in fetal development, manifesting in 1 out of every 5.5 million U.S. men, often alongside other anomalies.

As for complications in this case, DoubleDickDude reports that he has to orgasm every day or two or risk painful swelling.

And as favoritism goes, the slightly bigger one on the right seems dominant, or at least more sensitive.

There are a few other practical concerns:

The duplicate dongs have made for an interesting romantic life as well—he’s picked up women by telling them about his anatomy, only to have them bail when they realize he’s serious. As for his sex life, he has no complaints.

DoubleDickDude identifies as bisexual and is currently in a loving relationship with a man and a woman. “They were a couple before they mutually started dating me. She is straight, and he is bisexual and discovered he was when after four months of them both knowing me, they found out about my cocks,” he explained, and what a conversation that must have been. “It clicked and we’ve been together since.”

The hardest part about the dangling duo—besides surviving high school and teenagehood, the only time he was tempted to have one member removed—would seem to be the underwear situation. 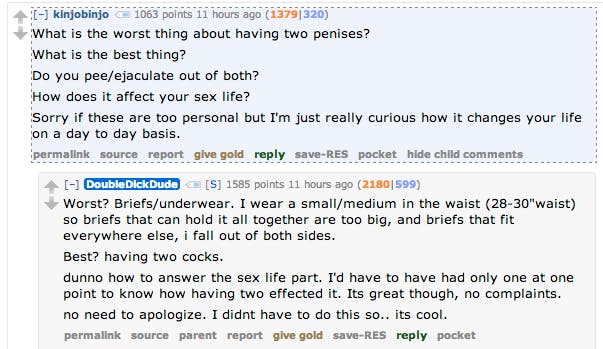 Even so, and despite his “monogamous” lifestyle, redditors couldn’t help but pitch a scenario where he got together with a woman who previously answered questions about having two vaginas.

Hey, it’s not like that sort of thing has never happened before.